Discorder: Wilderness Heart comes out on Sept. 14. Would you say it’s your best work so far?

Steve McBean: I don’t know. It just fits into the whole thing. I like the first two records too, but yeah, we’re proud of this one. It was fun to make. It’s different, but it’s what we’re doing right now.

D: The “Old Fangs” video has a wicked ’70s-rock-odyssey-road-trippy feel to it. Was that what you had in mind when you wrote the song?

SM: I don’t know, we just had the riffs for a while and stuff. For the video we were kind of going for the two-lane-black-top, “Lucifer Rising” vibe. It’s kind of a road song.

D: Do you consider it a teaser for Wilderness Heart in terms of sound?

SM: Yeah, this record’s got probably our most extremes as far as our heaviest songs and then some of our folkiest stuff. It’s kind of all over the place, but it’s a shorter record. You know, it doesn’t have like a 19-minute epic song on it.

D: I noticed there was a shift in sound from your first album to your second. In The Future seems to have more continuity and more completeness to it and Amber [Webber]’s voice is more prominent. Are there similar shifts or evolutions in Wilderness Heart to speak of?

SM: I don’t know. The first record was just kind of like a happy accident. We recorded in our practice space, at the Hive. I think it cost us like $1500 bucks to make or whatever. We just rented a bunch of stuff. The second one was done over a longer period of time, at the Hive as well. We got our friend John Congleton to mix it. I think this one was different because it was the first time we worked with people that actually took the official role of producer, which is cool. It’s just kind of that thing for the third record. I think for some reason third records are always like the dreaded record, it’s like where do you go, what do you do? For this one, there was some interest from producers and we kind of toyed with the idea and we generally came up with a list of older dead guys that we wanted to work with and once we realized we couldn’t do that we whittled the list down to either who was interested or who seemed cool or who was affordable. We worked with Dave Sardy for one song on the second record. That was a good time, going to Sunset Sound to record. And then his name came up. Then we just kind of stumbled across Randall Dunn from his work with Sunn O))), who I really dig, Jeremy [Schmidt] really digs. Even though they’re kind of different styles, you know. Randall does everything from black metal to tripped-out folk stuff or like Sun City Girls-type Butt Hole Surfers stuff. That was pretty interesting to us. We had the opportunity to take a chance in that way, so we figured let’s give it a shot, see how it works. It was fun. It gave us more time to concentrate on just playing as opposed to fucking around with sounds. The big thing about recording is there’s so much listening involved, you’ve got to listen back to like a whole bunch of takes and argue that, you know, “Oh, this one’s good” or “This one’s good.” But when you have someone that’s in that role and you trust, it’s a weight off your shoulders.

D: Did working with producers inevitably give the album more of a pop sound or would you describe it differently than that? Will it appeal to a wider audience?

SM: No, I don’t think it’s that. I think any of that came from the songs we had. Generally they were shorter. The new record might be a bit more melodic vocally, but that’s also just probably us having been on tour forever, me and Amber singing together every night and then building a bit more confidence in that way. Maybe it sounds funny, but there’s less weed on these records. But [the producers] didn’t force where the band’s going. They hopefully just help the band along in whatever road you’re taking. So they weren’t like, you know, ordering up pop songs or “make this shorter.” That was where the band was at anyways.

D: Can you give a little narrative of Black Mountain’s creative process; how a song will evolve from say the first line or melody in your head to the recording process?

SM: Most of them still kind of started like, probably, folk songs, you know, acoustic guitar and lyrics and melody and stuff. And then we just kind of jam on them and sometimes they stick to that and sometimes they go to a completely different space. It all depends, like for this we either had a bunch of riffs or a bunch of songs and we just kind of went to our practice place and just jammed them, played them over and over again, argued about them, figured out what we liked and stuff. And I think once we felt we had the strongest 12 or whatever it was, we sent those to the recording dudes and they gave us their opinions. It was pretty similar to any of the other records. There was a bit of demo-ing or whatever you want to call it, but mostly just jamming.

D: You tagged the album your most “fetal” … sorry, most folk and most metal album yet. Yeah, call it “fetal” I
guess.

SM: (Laughs) Definitely our most “fetal.”

D: How did you find interlacing those two genres, I mean it’s something you’ve played with before, but why the sudden urge to go more folk? Was it just sort of like you said, where the band was at this point?

SM: Yeah, I think sometimes it just comes from the way you’re writing. We had some time off, so sometimes if someone’s just writing the song in their room, you’re more laid back or whatever. The first bunch of songs we had were more of the folk element and then at the last minute a whole bunch of the more riff ones showed up and kind of just balanced it out.

D: I noticed you guys received a lot of great press over the years for your ability to elicit that old school kind of stoner rock sound, but there’s also a few critics who say that limits you. Do you have any thoughts or comments towards that?

SM: Well, it’s like when we first came out, there was the obvious references. And then, you know, you get lumped. I guess it’s to do with rock journalism. It’s like, what three bands does it sound like? But we would get things like, “Oh yeah, you guys are stoner rock. You sound like Kyuss,” or whatever. But none of us ever listened to Kyuss and stuff. It could be it’s a similar thing for them—I’m sure Kyuss listened to Black Flag as we did, or some of us did. Whatever, if people want to put a label on it, that’s fine. We’re obviously more into stoner rock than gangster rap. It’s not a big worry. It’s one of those things, when you’re in a band and some people get mad and are like, “Oh, what are they doing? How can they do that?” It’s like with any other band, whether you’re playing to two people or a thousand people, it’s still just a band and it’s for fun. You’re gonna do what you wanna do. If I’m placed with the choice of putting on Black Sabbath or Vampire Weekend, Vampire Weekend’s like, never, gonna win. It’s just that thing of who we are as people and stuff. So if that’s where we fit and that’s where people wanna put us, I don’t really care.

D: The album cover is pretty impressive. Who came up with that?

SM: Oh, that’s Jeremy. Yeah, that’s kind of his thing. He did the last record cover for In The Future, and then he’s done record covers for a lot of bands. He did the new Trans Am record cover and Zombie. Yeah, he’s a little graphic artist. He loves design. He did a few covers and we definitely all thought that, yes, that’s the one, you know?

SM: Yeah, I just live on the beach down here. I wake up and eat Mexican food and, you know, hang around. Wear flip-flops. It’s nice down here. I mean I like a lot of places in the world. For right now I don’t have to be anywhere, so I can be wherever I wanna be, which is a nice freedom.

D: Well enjoy it, because I see you’re about to go on a pretty massive tour there.

D: You looking forward to that?

SM: I mean, it kind of makes you wanna throw up a little bit when you look at the list of shows, but at the same time, it’s like, if you’re gonna get in the van and all of a sudden start complaining, why are you doing it? For most people that play music, that’s kind of like the goal and the dream and stuff. We get to go to a lot of places that I’d never get to go if it wasn’t for the band. I had never been to Europe before Black Mountain. It was one of those things, I never had the money and it was like, “how the hell am I gonna get there?” We’ve been there 12 or 15 times now. So it’s nice. And then you’ve got friends you get to see.

D: You’re really well received in the U.K., I noticed.

SM: Yeah, the U.K.’s been kind to us. I like the U.K. It seems like one of the few places left where the magazine is still holier than the blog—the music press, you know, which is kind of cool. I assume they have blogs there, but it seems like it’s still in that kind of old school way. It’s cool, because the generation gap is maybe a lot wider too than most places in North America. So it’s like you can do an interview with some guy who’s been doing it since the ’70s. So it’s pretty fun to just rap with them about crazy old shows, Jesus & Mary Chain riots or Crass or whatever, you know, all the stuff that they’ve seen. It’s always a good conversation.

D: Thanks, Steve. Best of luck with Wilderness Heart! 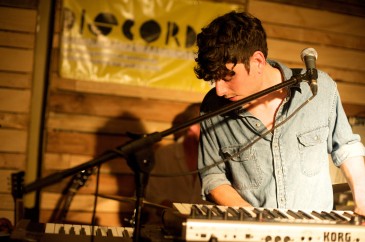