Sometimes cheap “sounds like this other, preexisting band” comparisons are the best way to go for record reviews, and I will begin by giving an abridged list of bands/artists that Flash Palace sound kinda like: the Books, Atlas Sound, Explosions in the Sky. If you like any of these bands, you will be very pleased with Flash Palace’s new EP, Some Misinterpreted Sunsets, and should purchase it immediately. It’s available as a cassette, for audiophiles with access to old stuff, and download, for those of us who don’t see any intrinsic or nostalgic value in outmoded technologies.

While Flash Palace play within a similar genre explored by the artists listed above, these comparisons don’t detract from the band’s ability to create innovative rock collages. On Some Misinterpreted Sunsets, the Vancouver quartet construct complex post-rock jams, with dreamy, layered vocals that drift in and out of the tracks.

These songs are interspersed with electronic elements, like the glitchy drums and pulsing electronic bass on “sasa,” which sounds like a blissed-out reinterpretation of both minimal techno and seething dubstep, as the song progresses. Considerable craftsmanship has gone into this album, as evidenced by the seven-minute “Seventy Lives,” which is all looping guitar, ethereal vocals and unexpected transitions. Some Misinterpreted Sunsets is both cerebral and nostalgic, and goes beyond simple comparisons to works that may have influenced its creation. 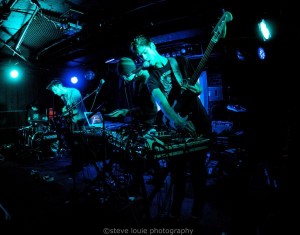