It can be a daunting task for unknown bands to secure bookings, which makes Shindig a chance for local acts to prove they are worthy of more exposure. On the event’s inaugural night, three bands competed with what at times seemed like fierce tenacity, but in the end only one would come home with this night’s Shindig crown.

The night started off with Against Civilization. In the beginning, they sounded as psychedelic as their wardrobe looked, pumping out some great bass and drums. But their early psych tease ended up standing in sharp contrast to the melancholic exercise that dominated the concluding set.

The second band, Analog Bell Service, possessed a vast repertoire. Band members mixed banjo and piano with bass and guitar, along with some welcomed whistling. Both lead vocalists sounded good and demonstrated great timing as they alternated back and forth. Analog Bell Service were passionate in their delivery and connected well with the audience.

The last performance came as a solo act. Zombie Pistolero and His Guns demonstrated an authentic voice, as well as a genuine conviction in his lyrics. Yet, compared to the first two bands, Zombie Pistolero’s style and delivery was more subdued, making the performance more fitting for an open-mic night than a rock show.
In the end, it was Zombie Pistolero who came out the winner on the opening night of Shindig. However, Analog Bell Service gave the best performance. They played so many different instruments, had great chemistry and showed a lot of substance in their lyrics. The band were adept at changing tempo between songs with little effort, while Zombie Pistolero played the same style throughout his performance. It would be interesting to find out how the decision was made. 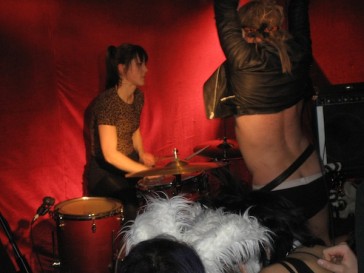