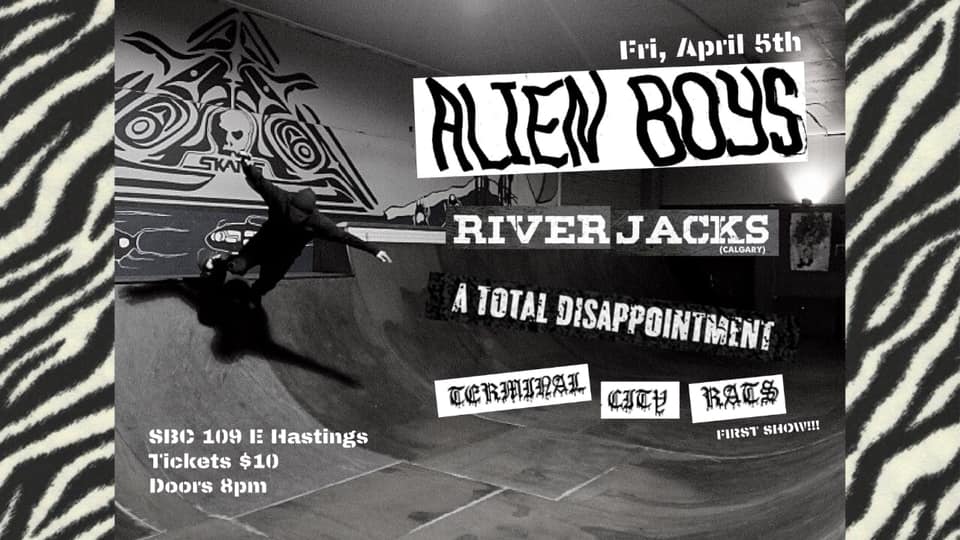 At the iconic loud SBC Restaurant (formerly the Smilin’ Buddha Cabaret), Alien Boys slayed with a high energy performance that engaged the entire crowd. They were preceded by a performance from the opener River Jacks, a five-piece band performing punk music with a folk twist. Straight out of Calgary, their sound was inspired by the originators of punk rock, with both politically fuelled and conversational lyrics. Their blend of punk and folk, almost resembling a street busker style, created an easy listening experience for the audience.

Following a necessary smoke and beer break, the five members of Alien Boys erupted onto the stage with intense chaotic energy that made the crowd, who were scattered across the venue’s halfpipe, go wild. The powerful energy that the lead singer manifested was absorbed by the crowd — as she jumped from one side of the stage to the other, the audience could barely keep up. The sweat mixed with cheap beer remains the perfume at a punk show wafting from one side of the venue to the other. The aggression from the group is to be expected when at a punk show.

The vocalist screamed out politically fuelled lyrics about fentanyl and gentrification poisoning the streets of Vancouver, reminiscing about a lifestyle choice involving benders to numb out reality. All the while, the guitarist slammed out one riff after another as the bassist picked up speed. The drummer kicked it all up a notch with an addictive beat — the fast composition releasing a rush of pure punk power into the audience. As a response, the first row of the audience started headbanging along to the quick rhythm. A few of the more passionate audience members threw punches into the air, their fists eagerly rising as if in the hopes of sparking a revolution.

The scene at SBC resembled a ‘70s punk show that fuelled an era of angst and rebellion against the status quo. Despite all that angst and rebellion exploding throughout the room, Alien Boys remained diligent in maintaining their tight and intense punk sound. Right before the end of the set, a buddy brought over five cans of beer for the band to fuel the encore, and finish the night with yet another engaging performance from Alien Boys.

The evening showed that punk is not dead — far from it. It is alive and ready to show em’ how it’s done.