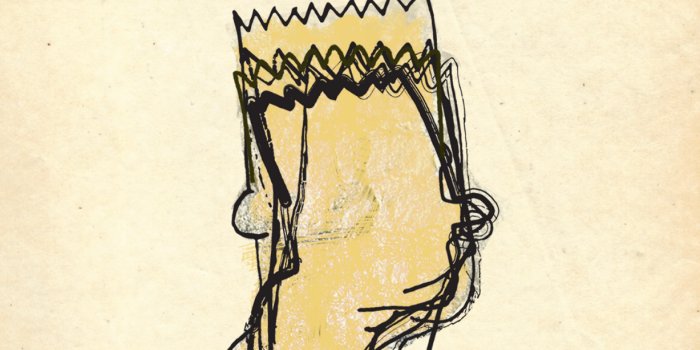 The minute you step into the Studio 1398 building, you enter the future. Mounting the stairs to the third floor theatre space, you encounter spray-painted cardboard proudly introducing Mr. Burns, A Post-Electric Play. Posters of recent films spiral the staircase, graffitied with images evoking The Simpsons and something vaguely post-apocalyptic. Thanks to the Lobby Project initiative, the audience is immediately presented with immersive decoration that is clever, unsettling and funny, much like the play itself.

Set in three acts in three time periods, Mr. Burns is at once strange, hard and delightful. In a version of our world where widespread nuclear meltdowns have shifted society and decimated the population, it explores the mutation of culture when all that is left of electronically-consumed entertainment is our memories of it. Taking place seven months, three years, and 82 years post-meltdown, Mr. Burns presents an attempt to hold onto cultural memory when all the world’s conditions have changed, focused around The Simpsons episode, “Cape Feare.”

At the centre of this piece is the relationship between storytelling and humanity — the necessity of the former in preserving the latter — and the vital importance of art, even and especially after our worst fears about society’s destruction come true.

Anne Washburn’s writing take us expertly through these time periods, weaving subtle yet recognizable ties and imagining an intriguing approach to post-electric copyright and information sharing. The world of the play is drawn with similar subtlety and effect, getting progressively safer and allowing the performance-within-the-performance to take a more central position. By act three the dangers appear to have receded; our characters can get through an act without whipping out defensive weaponry. And the theatre they produce in that context, that new world, is truly remarkable.

The design aspects of the show follow a similar evolution, mounting in finesse as the acts progress, mirroring a post-disaster rebuilding of capacity. Heipo C.H. Leung’s set design is flexible and full of fine touches. From the opening curtain gap of nuclear glow to the third act’s striking set, the transitions are extensive, but well worth it. Of equal note is the costume design courtesy of Johnny Hamilton and masks by Sarah Elizabeth (look closely to spot the material of which Mr. Burns’ face is cleverly made).

But all this creative infrastructure would be nothing without the performances to carry it through. This script asks a lot of its actors, and the seven-person cast of Mr Burns more than rises to the task; they sing, they dance, they navigate the apocalypse. Graham Coffeng brings a compelling range to Matt, and Stephanie Iszak is expertly cast as Quincy and Mr. Burns.

The creative team mustered by Little Mountain Lion Productions and Director Madelyn Osborne holds its audience in good hands, keeping them safe while keeping them unsettled. After all, this is the apocalypse. Nothing is sure. Except, in Mr Burns, A Post-Electric Play, a good time and a lot to consider.