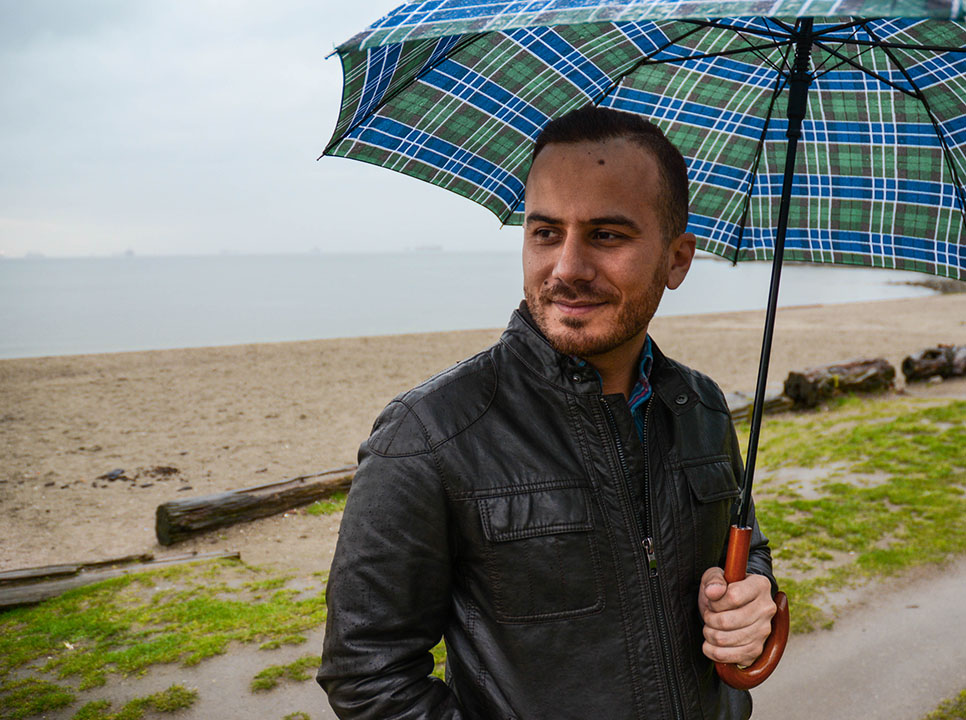 “Oh my god, it is the worst. It is by far the worst. It feels like the last minutes of giving birth to something, and it’s painful, and it’s bothering me. … It is actually one of the worst feelings ever. And a great feeling.”

This isn’t the reaction I expect when I ask Ahmad Danny Ramadan how he is feeling about the release of his debut novel, The Clothesline Swing. Granted, it is a ‘debut’ in the sense that it is his first novel, but he is established. His previously published work include short stories, regular columns, and articles for reputable international papers. I express my surprise, and Danny expands:

“The anticipation is killing me, but it is the same with every piece that I write because at the end of the day, I am writing in a language I don’t think in. And I am writing to people, coming from a completely different culture to their culture.”

Danny immigrated to Canada in 2014 after having been a Syrian refugee living in Lebanon. Although Danny tells me that he dreams in languages he doesn’t even speak — “I dream in colour” is his first response — his Syrian identity and the poetry of his first language, Arabic, help to define the eloquence of his speech, his perspectives, and the themes in his writing.

The Clothesline Swing is a fictional story about two gay men who fall in love in a complicated and beautiful Damascus following the Arab Spring, then immigrate to Vancouver’s West End. The men are lovingly haunted by memories of home as they grow older together, finding comfort in the quotidian.

As Danny and I sit at Sunset Beach, blocks away from his West End apartment, it’s impossible to avoid obvious and implied parallels between Danny and his protagonists. I ask Danny why he wrote this book, and his reply is slow and intentional. He explains, “I think I reached a point where I was filled with stories I wanted to tell, filled with issues that I wasn’t aware of how to deal with, and filled with traumas that I wasn’t even sure how to heal. … It was me just writing for the sake of me, for the sake of telling a story that is stuck in my head, and not knowing how to handle it.”

Danny is a born storyteller; like his characters; like many refugees; like many people. Over our conversation, it becomes apparent that there aren’t many instances where Danny and other Syrians are given the opportunity to share their personal stories. The narratives of Syrian refugees — and a lot of Middle Eastern history — have been reduced to shocking headlines and xenophobic assertions. The Clothesline Swing is a humanizing foil to the cold, spoon-fed media coverage of Syria’s political and social unrest. It is a (fictional) document of the honest experiences of queer Syrians abroad and immigrating.

The Clothesline Swing began as a collection of short stories that wove themselves into a novel when Danny moved to Canada. “I came here and saw how we are all viewed as Syrian refugees, or as queer Syrian refugees, and I started to see the tokenization that happens sometimes — the stereotyping, the misunderstandings between cultures — and started to think that this book should be a true representation of what my culture is like, and what it means to be a refugee, and what it means to be a gay person in Syria.”

Danny describes being queer in Syria as “horrible in so many different ways, but beautiful at the same time.” He continues, “It was so full of joy, and full of secret kisses in the back of taxies, and lovely people that you get to know and they become your chosen family, connections that you never thought you would make in your life — meaningful encounters.”

During my first reading of The Clothesline Swing, I write “tender, vulnerable, brutal” in my notes. The story is full of meaningful encounters in exquisite detail, beginning with an affectionate sex scene. Danny describes it as “the first time the two lovers make love. It’s happening, and in the background there are shootings outside. There are actual people killing each other outside.” This prologue sets the motif of Danny’s novel, best summarized by the author himself:

“Survival is not about being resilient. Survival is about finding a way to see the beauty that you have.”

There is another reason why storytelling is so valuable — it allows the teller to begin to process their experiences. It’s important now more than ever that Syrian refugees speak for themselves, rather than have media misinterpret them.

Asked about the shortcomings of Canada’s current immigration program, Danny replies, “When we bring refugees here, we put the responsibility on their shoulders to integrate into the community. … We get a lot of support from a lot of loving Canadians, which I am thankful for. The lacking would be that we are not a mainstream culture. You don’t see Syrian movies; you don’t know Syrian authors; you don’t know Syrian singers; you have never seen a traditional Syrian dance.”

As a nation committed to welcoming refugees, it is the responsibility of each Canadian to consider how they are welcoming refugees. Danny has some advice: “I think people should listen to our stories and read about our culture. People should try our food, for fuck’s sake it’s really good! … Learn how to say hi to us in our language. Listen to our songs.” (He suggests listening to older music by Assala, Syria’s answer to Cher.)

At some point I realize that Danny and I are only five years apart, but it might as well be a lifetime in experiences, mine so minimal by comparison. I ask one final question, perhaps naively: “What is home?”

“The more I bring over people like me, the more I feel at home,” answers Danny. “In Arabic we say ‘الجنة بلا ناس ما بتنداس,’ or heaven without people is not even worth stepping into.”

X
The Clothesline Swing is published on Nightwood Editions. It launches Thursday, May 4 with a party and reading at The Emerald.