Man, that voice. Nicolai Dunger, a Swede with many a talent, has recorded it once again for another little treat for the ears, on the overly-long titled Here’s My Song, You Can Have It… I Don’t Want It Anymore/Yours 4-Ever. It’s a mouthful of a moniker, but perhaps appropriately so—Nicolai Dunger’s vocal chords are no doubt his most valuable asset.
He is also a very capable songwriter, and his career thus far displays an interest in exploring various musical styles in his songs which mostly deal with love, loss, and yearning. His early records were fairly experimental, but with 2001’s aptly-named, heartfelt Soul Rush came more accessible songs and notoriety, gaining numerous comparisons to Van Morrison. But, as if refusing to be typecast simply as a blue-eyed soul crooner, his next album, 2003’s Tranquil Isolation, was a foray into American folk and country, in which he collaborated with no less than Will Oldham himself. It made for an excellent, sincere record that once again sounds much like its title implies.
Now we have Here’s My Song…, in which Dunger has successfully blended the styles of his last two efforts into a soulful, tranquil set. And as always, his stunning vocals are at the forefront. The parallels to Morrison are still relevant, as in the upbeat “Hunger,” or in the reflective “Slaves (We’re Together Like)”. He hasn’t strayed far from his country leanings either, most clearly heard in songs like the mandolin and slide guitar-rich “Tell Me,” and the delicate waltz “Country Lane”. There are also some hints of Jeff Buckley, as in the acoustic “White Wild Horses,” a starkly affecting song, my personal favourite on the record.
As I’ve probably made clear, Nicolai Dunger could record almost any old song and it would sound pleasant at worst, thanks to his gift of a singing voice. But as with his previous records, Here’s My Song… has many wonderful moments within, and shows Dunger to be a dedicated musician and talented songwriter, always exploring and developing his craft. 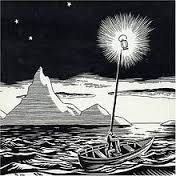