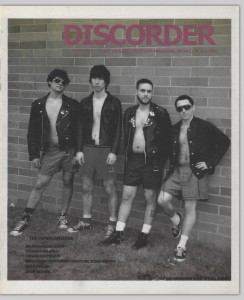 It was 8 p.m. on a Wednesday night in London, England, and the phone rang five times as Dan Snaith rushed across the room to pick up the receiver. He’s just come home from a day of rehearsal in the studio, and he’s a little out of breath. “Hey, how are you?” he asked, even though I was the one bothering him for an interview.

But Snaith is as generously kind as he is willing to expound passionately about his musical career as the frontman and visionary for Caribou, an infectiously lush electronic outfit with roots in Snaith’s hometown of Dundas, Ontario. Snaith has performed as Caribou since 2004, when he changed his name from Manitoba after backing down from a name-related lawsuit with Richard “Handsome Dick” Manitoba, an American punk musician and lead singer of the Dictators.

Snaith relocated to London in 2001 to start his PhD in mathematics at Imperial College London, which ended with the completion of his thesis, titled Overconvergent Siegel Modular Symbols, in 2005. “I loved studying mathematics. I loved being very in depth in this kind of arcane thing, just for the sake of the enjoyment of doing it,” Snaith said. During his first four years in London, Snaith divided his time between his studies and a burgeoning musical career that started with the release of 2000’s Start Breaking My Heart, an erudite collection of nostalgic pieces that evoke Snaith’s small-town childhood of the 1980s. “I really can’t imagine how I did both for so long, for five years,” he admitted. “I mean, mathematical research, it’s just such a competitive discipline… It really is kind of, ‘You have to learn more than anybody else in order to understand the problems and to be able to solve things.’ It’s exhausting, and it’s particularly exhausting if you want to do anything else.”

Snaith wanted to play music, even though his scholastic pursuits followed in the footsteps of his mother and father, both academics. “It’s what I wanted to do since I can remember wanting to do anything,” he said.

While he’s now left his academic career in the past, Snaith attacks his music with the cerebral precision and veracity of any serious mathematician. A perpetual tinkerer, he experiments constantly with sound, texture, and rhythm, listening obsessively to the nuances of a wide-ranging music collection. A live set will see him enthusiastically jumping from drum kit to microphone to children’s toy instruments and back, often to the backdrop of psychedelic videography put together by friends.

Snaith’s persistent thirst for innovation makes for a highly diverse and prolific career that’s now spanned a decade. His album Andorra won the Polaris Music Prize. While he’s grateful for the acclaim, Snaith doesn’t want critics to define his career by one piece of work. “It’s important for me that all the albums are different. I think it would be impossible to make a similar album to the one I’ve made previously, because over a year of working on it every single day, how could you be excited?” he said. “It’s the process of making music that’s really exciting for me. That feeling that I’m going to do something that I’ve never done before is an integral part of that.”

Swim’s first single, “Odessa,” is rife with impish booty beats influenced by Snaiths’ recent return to work as a DJ and, by extension, to club music. “[It]’s something that I haven’t really had such a focus on, although it’s always been something I’ve listened to,” he explained. And while he’ll be the first to admit that his musical taste has changed over the decade that he’s been working as a musician, the tracks he chooses to curate his albums have also become more diverse. Swim is a far less unified product than 2003’s panoramic Up in Flames, or even the recent ’60s pop-tinged Andorra. In Swim, the opener “Odessa” gives nothing away as to how the rest of the album plays out. Snaith playfully alighted upon the percussive precision of “Bowls,” switched quickly to the pop comforts of “Leave House” and then to the geometric “Hannibal.”

“Looking back, I’ve made a fair amount of music, and now the thing that’s important to me is pushing the idea of making it really as much ‘me’ as possible,” Snaith said.

More than anything, the joy of Caribou is realizing a lifelong ambition that Snaith previously dismissed as just a dream. “When I think back before my first music was released, it just seemed a massive distance away. It seemed another world that people were releasing music and playing concerts. It seemed totally unattainable,” he recalled. “So I always want to retain, [to] remember that perspective of it seeming so impossible that I’d be doing what I was doing right now.”

Of his career so far, Snaith said it’s always had the character of a dream.

“I just feel so lucky. I never want to lose that feeling.”