Mainstream ideas of drag invoke gender performance along binary lines: men playing women, women playing men. But the Vancouver drag scene is rife with binary-breaking performances. Turning 10 this year, Man Up is one of the city’s best-known monthly events for what Host and Producer Paige Frewer describes as “broad-spectrum gender drag.”

“The basic premise of drag and of gender politics is that gender is performance,” says Frewer, who performs as Ponyboy, “you can create whatever character or whatever gender expression you wish irrespective of your biological body, and give it to the audience however you want to.” But this all-encompassing presentation of gender has not always been at Man Up’s core.

It has undergone many changes, and as its anniversary approaches, they are facing down another: the potential closing of their cherished venue, the Cobalt. But with some sparkle, spectacle and a sense of humour, Man Up’s trajectory is marked by a resilience in the face of difficulty that is as much a part of their story as their many successes.

Man Up’s name came from a desire to take “a problematic, oppressive phrase that is prescriptive about gender and reclaiming it […] making it accessible and articulated queerly,” Frewer says. This reclamation began in the most appropriate of places: a birthday party. In 2008, Frewer asked to host a birthday and fundraiser for themselves while working at Lick, Vancouver’s last lesbian bar. To help put together the event, they were connected with Sammy Samosa, an experienced drag performer and producer. “It was my first time trying drag, I didn’t know anything about the community at all. And then over the next month, Sammy started chatting with me saying, ‘I’ve been brainstorming bringing a drag king monthly back to Vancouver.’” Man Up began two months later.

In the beginning, Frewer explains that Man Up had a “very pro-lesbian, pro-woman, pro-reclaiming female masculinity vibe.” Performers were trans men. It began as a drag king competition, with the winner returning the following month to defend their title.

But over the 10 years of its mounting, the focus and format have shifted. With a variety show style, Man Up has organically moved towards a more expansive gender drag: “[it’s] something that the community and the performers have just infused into it and asked for,” Frewer reflects. Man Up’s mission statement, if it could be said to have one, is now in the spirit of “celebrating and embracing all bodies and all gender expressions.” As Kevin Learning, who performs as Anne Xiety puts it, “one of the jobs of drag performers and community leaders is to continue being radical and to make spaces for, and give voices to, all forms of queerness,” and Man Up fully embraces this, keeping things infectiously fun.

Man Up made its move to the Cobalt in January 2011, and has since seen a massive audience expansion, and helping to establish the Cobalt as a “queer hub.” As their notoriety has grown, so has the team’s political awareness. They have grown increasingly conscientious of who gets stage time, focusing on “representation and having femme bodies in the show, different sizes of bodies in the show, people of colour in the show […] That has also shifted the awareness of the audience as well,” Frewer notes. “We’ve also tried to be an extra-welcoming place and platform for trans performers who don’t necessarily always identify as drag performers,” they share, citing neo-burlesque performer That Siren Goddess as an example. This “more inclusive show,” according to Selina Shefrin, who performs as Owen, “brings everyone closer together. From performers to community members.”

Man Up’s reputation has enabled them to extend their reach beyond Vancouver. This month, a number of the performers will be travelling down the Coast to perform with Blowpony, a Portland drag party celebrating its own anniversary. Man Up’s 10th anniversary party in Vancouver will be held at The Imperial on March 30. Though more details are forthcoming, the sheer ability to hold a “big extravaganza” is due to 10 years of audience-building and community support.

But exposure brings its challenges. “We’re almost, in a way, kind of mainstream because we’ve been around for so long,” Frewer notes, “this means we get new guests and drop-ins, which is awesome, and super important, but […] they’re not regulars who know what the buddy system is, or who were around when we created the community agreements and understand about consent. And so it’s sort of a challenge to keep that learning process underway and maintain a culture of mutual respect and of queer focus.”

As folks outside the queer community flock to their events, this might indicate changes in Vancouver’s broader understandings of gender politics. More shows and performers continue to emerge, and the audiences keep coming. But queer and alternative spaces continue to shutter across the city, making longevity and the fostering of knowledge continuously difficult. “It’s this weird paradox,” Frewer says, “cause things are so dire for spaces, and yet there’s just this pulsating, thriving community of gender performance.”

At the forefront of Man Up’s concerns about space is the looming closure of the Cobalt. While it is apparently only shutting temporarily for renovations, there is no guarantee it will open again. Noting its physical layout, transit accessibility and a “phenomenal” staff, Frewer laments that the close of the Cobalt would be “the death of something really special […] if it does close, it’s totally irreplaceable.”

And yet, there is hope. “Not that I wouldn’t rewrite our history if I could, but in losing spaces I think it’s given different marginalized groups […] a sort of extra impetus to connect with each other,” Frewer shares. Though, as Keanen M.A. Schnoor, who performs as Karmella Bar notes, it will “be tough to get a new venue that really encompasses the essence of Man Up […] as long as we are together, we will continue to grow as a group regardless of where we meet every month.”

Looking to the future, Frewer mentions intergenerational initiatives as a hopeful next step. Man Up team members like Helen Proskow, performing as Femanáde, are interested in extending Man Up to include  “performances of all generations,” something Frewer hopes could happen in a space with some security: “I’m interested in whether a queer cultural hub could be possible that would have some longevity, and at least a lease that could guarantee us some sort of a future.”

But whether in a guaranteed space or outside of it, Man Up will continue to do what it does best, with a smile on its face, a song in its heart, and a big middle finger to adversity.

10 Years of Man Up Anniversary Bash will be held at The Imperial on March 30. Stay up to date with Man Up by following them on social media. You can see upcoming events and other stuff at facebook.com/manupvancouver and on Instagram @manupvancouver. 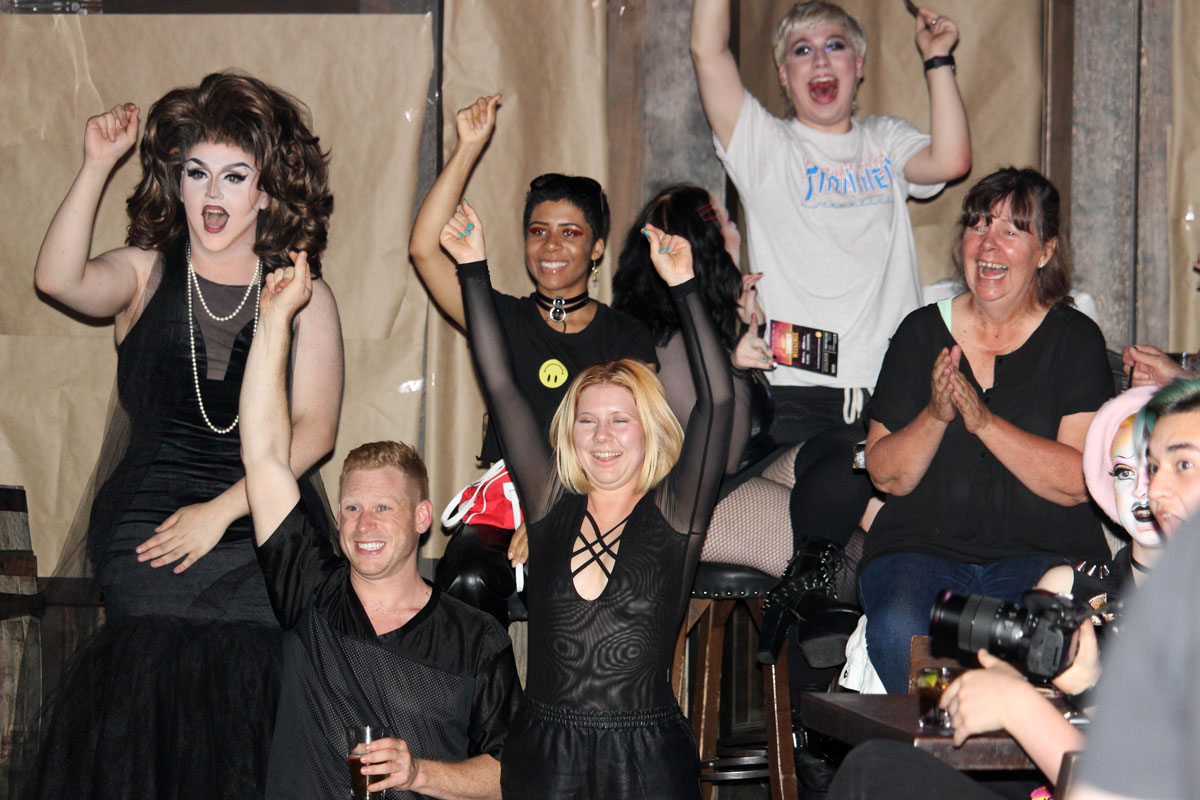