Last October, Fake Shark Real Zombie were playing the Lamplighter and had a small posse who moshed and slammed and knew the words to every song. Louis’s guitar riffs were mesmerizing, and his shuffle-shuffle kick moves, adorable. Kevin’s awesome balancing acts were also impressive as he sang and shouted out to his devoted fans, so much so Malcolm seemed lost behind the kit.

Fast-forward four months and their entourage has grown in size and their show has evolved into a completely different monster. These brightly dressed colour-coordinated boys know how to put on a show and adapt to the crowd they are playing to.

At the hall, I watched the ever-so-innocent-looking Kevin punking out, Malcolm getting acrobatic with his sticks and a British-looking Louis putting on one powerfully intense show. I heard the mutterings of people complaining about the sound system. “What the fuck?!” I said, and turned to one whiner, “It’s the Ukrainian Cultural Centre. Enjoy the show, fuck the sound.” And they smiled back at me, and we head banged for a moment. Ah, bonding.

However, I didn’t see anything that resembled “bonding” during the missile strike. Back in the day of Nina Hagen and Bad Brains, I don’t remember throwing water bottles at our music heroes. I cringed every time a bottle went flying near wee Kevvy and as he nearly stumbled to avoid them. But that boy has an incredible voice, as well as gymnastic balance.

The only thing wrong with this show was it was not long enough. I secretly wished they would have played a tribute to Test Icicles and broke out “Sharks” (as I heard they used to do), but they didn’t. What can I say? I tend to be greedy. However, the band did play every other song off their upcoming album, Zebra, Zebra, leading to more than enough satisfaction. 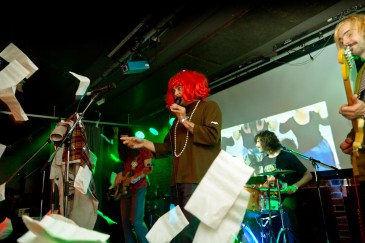