I’ve never been real big on Grizzly Bear. I mean, Yellow House received a few listens around the house, but it never really struck me as transcendental or anything—a fact that left me questioning whether I was the right Discordian for this review. I feared my cynical, old-man tendencies would get the better of me, causing an onslaught of scathing remarks to litter this review—and my mailbox. But after cuddling up to the stage at the band’s second appearance in Vancouver, I can safely say I now “get” Grizzly Bear and have no need to bring any hostility into this write-up.

So let me explain why last month’s show converted me into a bit of a gushing fanboy. First off, Grizzly Bear dispelled my preconceived notion that their live show would become some self-indulgent, free-form exercise. They kept things to the point during the evening, giving room for a bit of experimentation but never straying too far off course. For this I have to give the band high fives. Second, instead of relying on a bunch of vocal effects, these guys actually sang, and sang quite well—a reminder that Grizzly Bear’s four-way harmonies outdo the vocal loops some other bears use in their collectives. Third, the band turned up the rock, maybe not to 11, but, for my wussy ears, that’s fine. As the four players worked through a set mainly taken from Yellow House, they often turned the album’s strings and production tricks into crunchy guitar tones and some mighty big drum sounds, which brings me to my last piece of praise: Grizzly Bear’s man behind the kit, Christopher Bear (not sure if that’s his Christian name or a rock pseudonym). Bear drummed like he’s been studying under Michael Karoli for years, repeatedly pushing the band’s songs into a much more intense, rock ‘n’ roll territory than heard on recordings, such as during the concert’s climatic closer, “On a Neck, On a Spit”.

However, I do have a few minor grumbles about the night. The band’s take on my favourite Phil Spector song, “He Hit Me,” came out a bit too sludgy for my tastes, and the weird electronic bits could have been pushed up in the mix more. Also, the show hit somewhat of a lull at the three-quarter mark, causing loud chatter to rise in the club, but maybe the high quotient of weirdos in the crowd were talking for completely different reasons; I have no idea. With all the strangeness I witnessed that night, anything is possible. Numerous make-out sessions, violent rock fists and some maestros who conducted not the band but an unmoving crowd were at all sides. Then again, Grizzly Bear does make drug music, right?

So as I peddled home after the show, I contemplated how all my negativity towards the band had been flipped on its head, and a thought came to me: maybe first impressions aren’t that important after all. 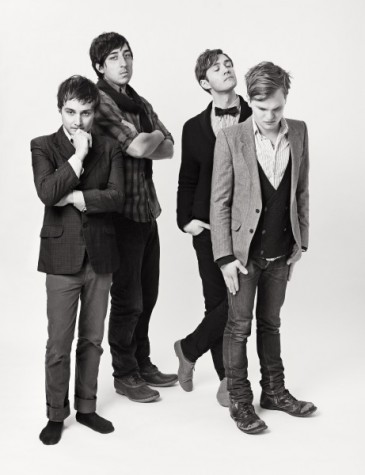