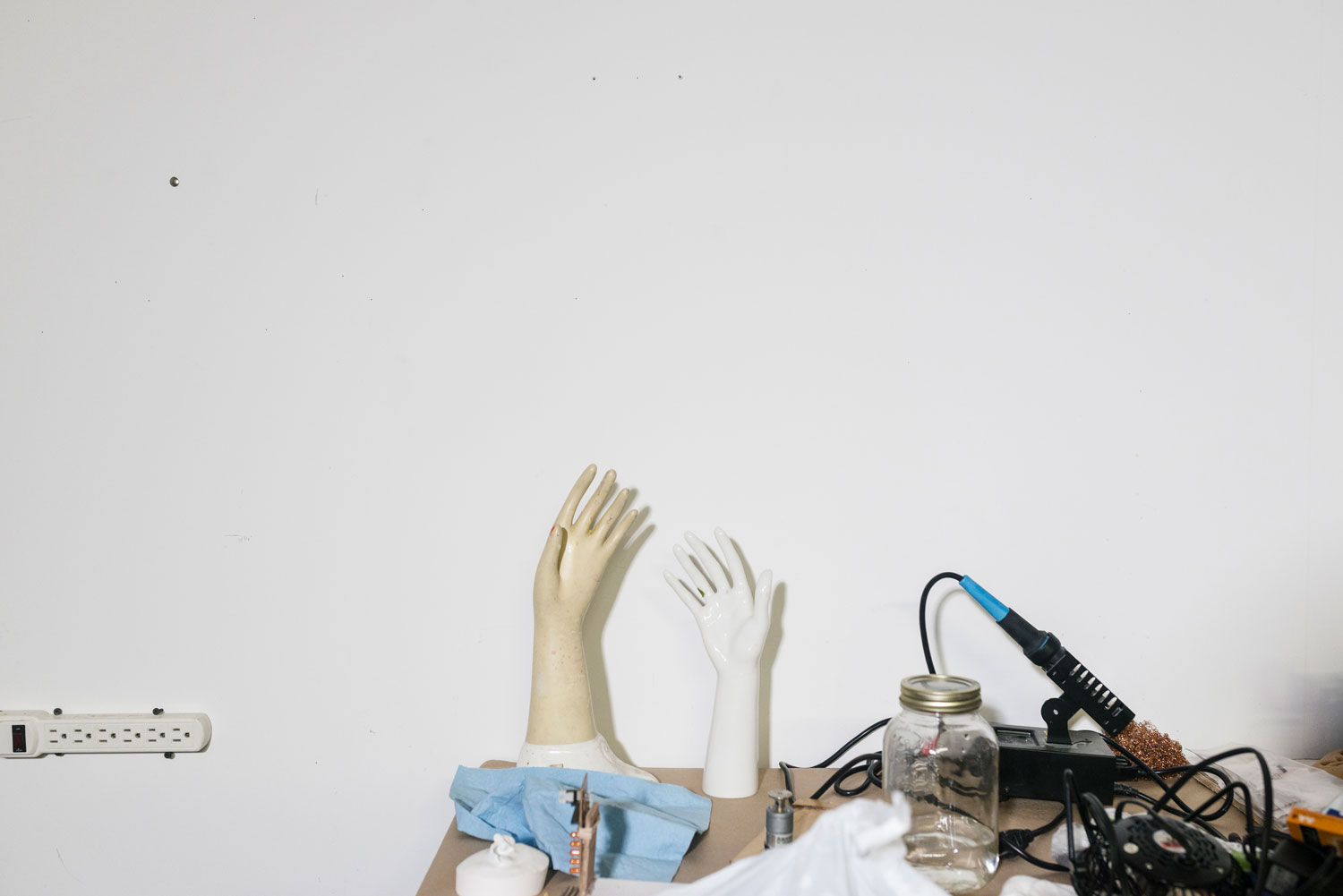 Duplex is a bit elusive to an outsider. Located on Fraser Street in an area known as Little Manila to some, it would be impossible to locate without direction unless you knew what their tiny duplex sign meant. Luckily, I was met with smiles from a group of studio artists huddled beneath a grocery store awning. Discorder met with Gabi Dao, Kara Hansen, Liam Johnstone, Scott Kemp and Jordan Milner to discuss Duplex, their collective and the ecology of DIY art spaces.

The main gallery space had already been installed for Clues, a show in collaboration with artists from Winnipeg that runs until June 7. It smelled of paint and the space was surprisingly small. I was struck by the blue glass installation in the centre of the white floor. It called me to crouch down and touch it.

In contrast to the gallery, the studio catacombs are large and modular, each room easily housing multiple artists individually while still allowing for easy access and collaboration. The only interruption is noise from above, footsteps and dragging sounds. On this Sunday, it was possible to hear hymns, high heels and what sounded like marbles falling. 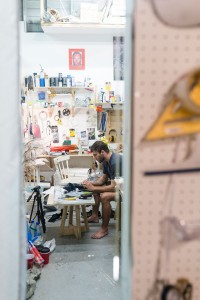 Water and electrical are the main issues of building maintenance. Slowly, the Duplex collective has been making repairs, but there are still problems with water leaks. “We have leaks on the backside of the wall, so whenever it rains heavily or someone pees on the side of the building, it goes right into our studios. […] It’s stuff like that we talk to [the landlords about], and they say it’s the City’s job [to fix],” explained Milner. Although in this circumstance it would be a landlord’s responsibility to repair leaks, in general, the City of Vancouver has little interest in supporting small studio spaces like Duplex. Lacking mass public interest, the City’s cultural plan from 2008 to present day has consistently failed independent artists working outside of the commercial or mainstream sectors, for whom funding can be life- and career-changing, whose work benefits Vancouver’s creative and cultural industries.

The fate of Vancouver’s studio spaces are cyclical, with affordable spaces purchased by wealthy business owners and redeveloped. As land value increases and landlords sell or set sights on condo redevelopment, places like Duplex are unprotected. Recently, Duplex’s landowners have been appraising the property and soil sampling. Johnstone explained, “We are on marsh land, effectively, [and] they have to test how deep they would have to dig if they wanted to get to solid foundation, especially if they want 6 storeys.” But this foreshadowing is good, said Johnstone. “The fact that they are doing it now is a red flag for us [for] a few years from now.” When the collective renew their lease, they will be looking for demolition clauses and any other signs that the owners were gearing up to redevelop the land. 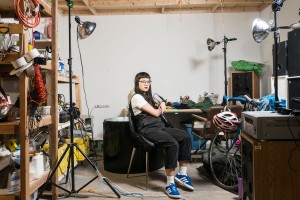 Though Duplex is aware of its own mortality, immediate development does not scare the collective. They all believe that they have had a good stretch in the studio. They moved into the space during the summer of 2015, after having to leave their former studio, Avenue, due to health concerns — the artists no longer felt physically safe at Avenue after a few dangerous incidents regarding roof leaks and building neglect. Duplex, having previously been vacant for six years, is 3000+ square feet and has served the needs of its artists well over the last few years. The collective hopes that they can keep it going for at least a couple more.

Operating through collaboration and consensus, sometimes programming can be off-the-cuff or inconsistent. Although Dao, Hansen, Johnstone, Kemp and Milner currently share programming and logistical duties, a complete list of the current and former founders, studiomates and programmers includes Susanna Browne, Patrick Campbell, Julia Feyrer, Maddison Killough, Brodie Kitchen, Monique Levesque, Jonathan Middleton, Katrina Niebergal, Alex Pichler, Tom Richardson, Kathleen Taylor, Michelle Weinstein, Stephan Wright and Setarah Yasan. This group represents about half of the artists at Duplex. Before the space was known as Duplex, there were artists running a portion of the building exclusively as artist studios, founded by Steve Hubert and Scott Lewis.

This collective effort is why on their website or in show programs, Duplex never posts individual names, instead attributing activities as “from the collective.” 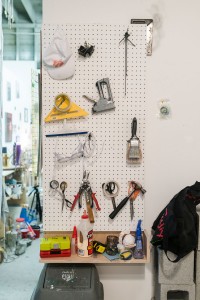 “Applying [ourselves] takes a lot of time, and we are all [working on] our individual practices,” Milner continued, “[Managing Duplex means] constantly splitting yourself. I think you can only do so much of what you are good at, which makes it a little more chaotic and unbalanced, but for some reason we are able to work that way instead of a hierarchical structure.”

The Duplex collective admitted that they are still learning how to operate and keep their space running. They can only compensate artists with what they earn through bar sales and tips, and through the gift of their own labour as organizers. Professionalizing has never felt right to them, however, and Duplex has remained a non-profit. Kemp expressed that they are generally comfortable with inconsistency and although they are “not ideologically opposed” to institutional funding, they don’t want to have to rely on it.

The strength of Duplex is that it has found a way of functioning as a DIY, artist-run space, and that its operations are not dictated by strict administration. If Duplex’s operations were funded by larger institutions or government grants, it could radically affect their work flow because labour would be focused elsewhere, in grant-writing and managing grant requirements. This administrative structure is not attractive to all artist-run spaces, and it can be argued that an artist-run facility should not have to conform to a certain model to acquire funding.

Building accessibility is still an issue for Duplex, as it is for many DIY spaces around Vancouver. People in wheelchairs would have a hard time accessing the gallery and studios. Because Duplex is not clearly identified from the street, a lot of shows do not reach the usual art patron.

This being said, Duplex has been successful at attracting different groups of people because the artists’ individual practices are so diverse and multi-media. An example of a dynamic ongoing series is Leftovers, which Hansen explained, “doesn’t focus on the exhibition of art, but rather proposes environments where artists and non-artists can produce or bring snacks, décor, music, lighting, etc.” Last summer, Duplex hosted a party with a bouncy castle as a fundraiser for a vacuum. 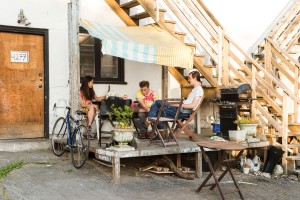 The goal behind adopting an unconventional gallery format and wanting more interactive art exhibitions is to attract more people to art. “The [social] architecture of gallery and physical spaces are not meant for human bodies, and not always inclusive of different kinds of bodies,” explained Dao, pointing out that galleries in general can seem quite exclusive. Milner agreed, “It’s a magnifying glass.” Duplex encourages people to get in contact and request viewings, not just of the gallery but of the studios as well.

The challenges that Duplex face reflect the nature of many DIY art spaces; coordinating studios requires the commitment of many people, all with different strengths and lengths of time they can put in, questioning how to sustain the space and themselves and not burn out. Duplex’s rhetoric is easy to understand. They believe that as artists, it is important for people who do not have the vernacular, confidence and connections to ask for visibility and access. People should be able to find ways of becoming part of art communities outside of commercial galleries, more established artist-run galleries, independent or civic institutions. As artists and organizers, they hope to facilitate dialogue, and insert themselves in the diverse ecology of Vancouver’s art scene.

In order to sustain an independant art scene in Vancouver, artists should feel empowered to demand space and make connections. Art patrons are encouraged to attend small openings, and support their neighbourhood studio spaces. You never know what you could find on the other side of that hole in the wall.

x
Duplex is located at 4257 + 4277 Fraser Street. Their next show is The Influencers with Shizen Jambor and Olga Abeleva, and will run June 14 to July 12. Viewing hours by appointment by emailing hello@projectduplex.com. You can follow Duplex on Facebook, on Instagram @duplexduplex_, or visit duplexduplex.ca for news and updates.