Go back two or three years, and you couldn’t keep Owen Pallett away from Vancouver if you tried. With last September’s show at St. Andrew’s-Wesley Church cancelled due to illness, it’s worked out to have been a while since we’ve heard that immaculate violin. All the better to stoke excitement for Final Fantasy’s first Vancouver show under a new name, his own. And wasn’t the Vogue a perfect venue for it? It’s ghetto enough to not feel fussy like the Orpheum, but fussy enough to keep the crowd seated and attentive for the entire show, including fabulous openers Snowblink. Delicate fingerpicking from the band’s two members was supported by synth basslines powerful enough to make up for a lack of percussion (and, controlled by foot!). The strongest part of their set and their sound was clearly Daniela Gesundheit’s vocal melodies. Her voice’s gentle folksiness matched well with the songs’ lilting phrases, and were often reminiscent of Joni Mitchell (at least, this reviewer thought so).

Snowblink’s set’s playfulness contrasted the formality of Pallett’s. Opening with the melancholy “E is for Estranged,” Pallett kept his first few songs restrained. “This is the Dream of Win & Regine” was played to the delight of the audience, and followed by unreleased rarity “Scandal at the Parkade” and an old favourite “That’s When the Audience Died.” Pallett was then joined onstage by touring multi-instrumentalist Thomas Gill, who helped bring some of Heartland‘s tracks’ grandness to the stage. It was during these new songs that the show began to loosen up, with the two musicians giving varied reviews of their dinners (Guu didn’t work out so well) and generally becoming more comfortable on stage. After a few songs (including a beautiful and cheered-upon-recognition of “The Great Elsewhere”), Gill left the stage for Pallett to play a few more tracks, a cover of Simon Bookish’s “Interview” being a highlight, before returning to show his guitar proficiency on “Many Lives → 49 MP” and ended the show with the dramatic “Lewis Takes Off His Shirt”. A standing ovation brought the two back quickly for an encore of old standbys, “Better Than Worse” and “This Lamb Sells Condos.” The two tracks were a nice touch considering the Heartland-centric nature of the show and the lead-up to it. Considering their skillful performance, and the thunderous applause that followed, it should be clear that Owen Pallett has always been an incredible musician, but it’s now that he’s beginning to get the full popularity and recognition he deserves. 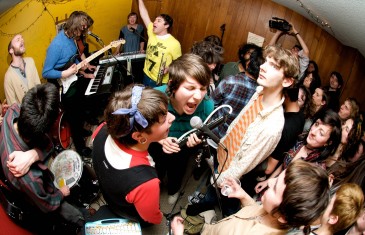