Xiu Xiu: I first read those words as a small lowercase stick-and-poke tattoo in between the shoulder blades of a friend. Though to call them a friend grossly misrepresents the complicated, difficult, unbelievable relationship we had—precisely the type of relationship made of secrets, shame, and at times, transcendent joy that Jamie Stewart, frontman of Xiu Xiu, portrays in his elegant and awkward storytelling. My friend’s tattoo looks so different from the tattoo gracing the cover of Always, the album for which Xiu Xiu is currently touring; one is formed of thin shaky lines, the other of uppercase blocks with an ostentatiously stylized “Always” in between each Xiu. Since vulnerability seems to be what Xiu Xiu is all about, I’ll disclose that I have very little experience with their work.

I was at the Biltmore on this particular evening to catch the much talked about Montreal / Toronto-based group of “noh-wave” musicians, Yamantaka // Sonic Titan. Their eclectic blend of opera, psychedelic noise, sludge metal, and prog rock is assembled by a self-consciously anti-oppressive collective of musicians of Japanese-Scottish and Chinese-Irish roots. Normally, they mix a dizzying array of musical genres, and are also known for elaborate set designs and costumes. Unfortunately on this night, we were merely treated to music with a dash of face paint.

Yamantaka // Sonic Titan opened strongly with “Queens,” a blend of Japanese opera and King Crimson-esque prog-metal. They performed some seamless, but perhaps too perfect, versions of “Hoshi Neko” and “Crystal Fortress Over the Sea of Trees” from their debut album, YT//ST, incorporating aspects of ritual to their performance. At many moments though, I yearned for a more apt setting, perhaps deep woods or an altar rather than the ordinary stage of a concert venue.

Jamie Stewart was in some sort of restrained frenzy. Sweat poured off his face, though he barely moved; the manic leaps and screams during their cover of Suicide‘s “Frankie Teardrop”, during the encore being the most obvious exception. There was an emptiness in the room, filled in shutters by Stewart’s breathy, halting vocals minimally backed by Angela Seo on keyboards, gongs, and some non-standard cymbals. “Sad Pony Guerilla Girl” was a highlight of the evening where Xiu Xiu brought the Biltmore to near silence, embellishing the horrifying delicate quiet that sleeps amidst memories we might rather forget. 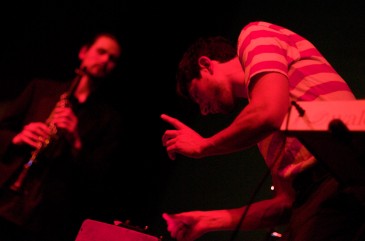