The air of anticipation before How To Dress Well’s Vancouver performance was thick. Though Tom Krell — the man behind the R&B project — is a native of Brooklyn-via- Chicago, the midweek show at the Waldorf was akin to a homecoming after five dates on the East Coast. After all, it’s here in Vancouver over the past month where Krell first teamed up with locals Cameron Reed of Babe Rainbow and multi-instrumentalist Aaron Read to rehearse and work out the kinks for a secret June 1 show, also at the Waldorf, prior to the tour.

The practice practically made perfect as How to Dress Well offered up a transcendent set of what may be the best voice to belong to a philosophy grad student. Backed by an array of violins and synths, Krell stood before a transfixed crowd, wearing an oversized Elite Gymnastics shirt, and offered a dissertation on early ‘90s R&B and maybe even 21st century gospel.

He started off testy, quibbling with the engineer over the lights, but it was just his perfectionism that permeated the whole show, from the floor-to-ceiling visuals to his second mic designed to sound like an echo in a canyon. Belting out melodies with his eyes closed and one hand up his shirt, Krell had a clarity not quite found on previous How to Dress Well recordings.

Mixed with the older stuff came new songs like “Running Back,” featuring an Ashanti sample that looped and danced around the beat, appropriately ghostly. Another new song ended with Krell repeating a laundry list of lost loved ones from Andrew to Micky to Donna to Jamie that was perhaps the emotional high-point the show. The crowd stood still, dead silent and entirely devoted; for the encore, Krell treated them to a solo performance of “Decisions,” one last soulful treat before his fans were flushed back into the real world. Yet, you could see sadness in Krell as though he realized he had to return to reality after the song was over. As much as the audience had been transported and reformed, so had Krell, and both were temporarily lost when the house lights came back up.

If it’s true that this tour was a prelude to How to Dress Well’s much bigger tour after the release of Total Loss — his sophomore full-length slated for release in the fall — then word of mouth might put Krell in a bigger venue than the Waldorf when he strolls through Vancouver again. 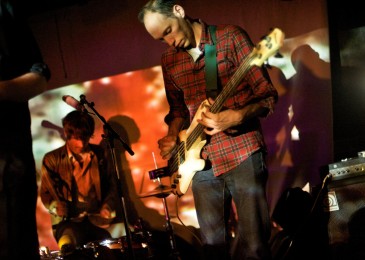