It’s getting serious. The SHiNDiG semi-finals started on November 15 with three groups spanning a wide range of style. The Killed Spirits kicked things off aptly, since the show seemed to progress from simplest to most intricate set-up. The heavy trio was reminiscent of an angry blend of the Jesus Lizard and Minutemen, the former particularly apparent during one of their slower songs, which the bassist described as “a bluesy one.” The straightforward drum-bass-guitar attack was a reminder that sometimes it’s best to keep things simple. Incomprehensible vocals drew from the performance a bit, but catching bits such as “death lives upstairs!” and “can you hear me now?!?” was sufficient to understand the vibe.

The night moved from loud and furious to quirky and excitable as four-piece Real Boys took the
stage. The enthusiastic group’s whiny vocals came across much more successfully live than recorded. A major shortcoming of the performance, however, was its brevity; the set was finished before a real absorption of the music could occur. Despite a brief stay, they managed to maintain, if not heighten, the excitement of the night, as the crowd started to fill in.

Tyranahorse, providing the experimental portion of the night, stole the show. All in costume –
white tees splattered with paint – the charismatic quintet impressed with a diverse range of sounds, from jazzy keyboard riffs to pure, sexual rock ‘n’ roll. Siouxsie Sioux-esque frontwoman Prophecy Sun helped separate the band from the herd. Tyranahorse hit the right notes with the crowd, crooning about foreplay and begging for alcohol over smooth, unique insturmentation. Clear winner: Tyranahorse. 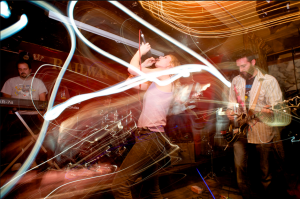