I let go of any preconceived notions I had and gave Nerdfest 2011 a try, and it was a blast. This wasn’t about protractors, pocket protectors and post-nasal drip, mind you, but about leather and gothic, fantasy-themed metal bands. These are the nerds of the round table: the gamer tweakers and swordplay geeks. Sure it was a little out of my element, but there was something about this room full of easy-to-talk to fanboys and fangirls that felt inclusive and different from other gigs. On hand was a display of finely crafted swords, chainmail and sparring poles, all of which were hands on and generously explained by the folks manning the surrounding tables. Then there was the crowd, a quarter of whom were dressed to the nines, and not in formal wear.

There was the mysterious shogun standing guard in leather armour that looked like it could stop a bullet. There were Norse soldiers drinking “mead” from goat horns. There were a couple of roman legionnaires that didn’t skimp on the details. There were leather wenches that looked poised to make meat out of anyone who crossed them. Even a Merlin was present, wandering aimlessly through the crowd in a daze, waving his fingers and casting secret spells into the ether. I loved how much work went into these costumes; nobody took themselves too seriously, nor cared how they looked to anyone else. Even the metalhead skids with secret nerd tendencies were having a laugh riot.

And the music was awesome! I couldn’t help but enjoy the sheer cheesy fun these bands exuded. Three local-ish acts were on hand to thrill and entertain, along with a couple of saucy burlesque performances, one of whom had plates attached to her body and used a disk grinder to add spark to her performance.

Vancouver’s Celestial Ruin was nearly finished when I arrived, but they were a fairly cut-and-copy Victorian-era metal outfit with a female vocalist whose operatic voice soared. Eye of Odin had a bit more of a scary thing going on. With a fake blood-covered frontman whose bassy voice sounded like a jet engine, the Nanaimo-based outfit specialized in lumbering battle metal about traversing mountains in the mist and slaying armies of undead soldiers.

Lastly, Scythia was absolutely great and may have swayed me to side with D&D metal. They were just so tight, and their Tolkien-approved tunes were of the highest quality. I went home that evening with visions of damsels in distress and their wild-eyed saviours playing across the battlefield of my mind. Even if I never pick up a sword or seven-sided die again, I can reflect on Nerdfest 2011 and remember that for one night, I was home. 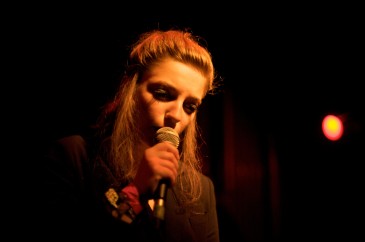