Buffaloswans cast their time-bending and mind-altering spell over the audience at the Russian Hall last Thursday night, as they debuted their new album The Body Electric. The concert was the culmination of three years of artistic growth and exploration, and clearly the fruit of that development was well worth the wait. Buffaloswans have managed, both on their recording and in their live show, to capture a sound that simultaneously looks backwards and forwards, while remaining fully in the present.

The show was opened, however, by Henry & the Nightcrawlers, who made up for their fashionably late arrival by hitting the ground running. Their performance was rougher around the edges than their recordings, offering a grittier rock feel rather than the polish of pop.

It seems highly appropriate that “The Body Electric”, the name of both the album and one of the finest songs of the night, is drawn from a Ray Bradbury short story entitled “I Sing the Body Electric,” which in turn is a reference to a line from Walt Whitman. Bradbury’s story of a widower who buys his children a robotic grandmother is equally old-fashioned, futuristic, and concerned with the human experience. Buffaloswans share this rich aesthetic sensibility. Their music is rooted in the traditions of folk rock and Americana, employing guitar riffs and lush vocal harmonies reminiscent of the Band. Their progressive side is evident in their use of ethereal, atmospheric effects, more complex song structures, and varied instrumentation. The thoughtful lyrics provide the soul that keeps the elements in balance and brings each song to life, such as “A Spark,” which explores the question of whether a spark of life or love can endure the ravages of time.

Between the glow of the lights on the Russian Hall’s wooden dance floor and the psychedelic fractals projected on the back wall, Buffaloswans embraced the juxtaposition and performed their feat of acoustic alchemy. The warmth of Scott Bell’s lead vocals combined beautifully with James Lamb’s tasteful guitar playing. The superb Wurlitzer and organ playing of Jobi Mihajlovich provided a rich texture, which along with the accompanying cello, French horn and trumpet, created some of the “1000 Colours” heard on the song of the same name. All of this was built up from the foundation laid down by the rhythm section of James Green on bass and Stephan Mihajlovich on drums.

Buffaloswans brought the mere metal and circuitry of speakers, electric guitars, organs and microphones to life with an artistic vision that confirmed Bradbury’s belief that technology can heal, rather than hurt, humanity if it is used to “shadow forth” our dreams. Along with a
growing number of fans, I look forward to exploring all that this new record has to offer and will be waiting with anticipation for more from Buffaloswans. 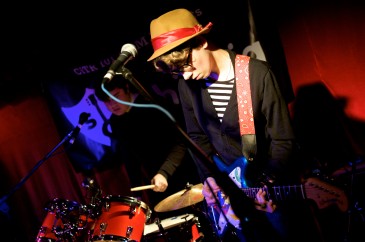