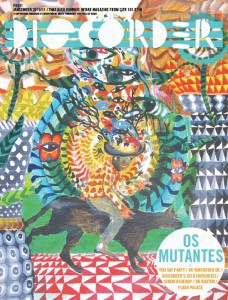 You Say Party has come a long way since 2003, and in the last year they have gone through a period of dramatic transition: You Say Party has dropped the “We Say Die!” from their name out of respect for deceased drummer Devon Clifford who collapsed during a concert at the Rickshaw Theatre. Band members have left the group and been replaced by musicians from the local groups Gang Violence and Hard Feelings. On top of everything, YSP also just released a remix album titled Remixxxx and are currently in the process of a lengthy European tour. Stephen O’Shea (bass) graciously answered some questions for us via email from their tour.

Discorder: First off, how is Europe?

You Say Party: Coming back to Europe after three years absent has been amazing! The audiences have been strong in their response to us, as if no time has passed. They all know the songs from XXXX and that’s been really rewarding. After the band fight at the end of 2007, we weren’t sure when we were going to return and this tour has been incredibly healing after the loss of Devon.

D: It looks like it just took a few years and now critics are raving about your albums. That buzz is spreading across Canadian campuses and you have gained international recognition. How different do you feel now, compared to when you were playing music in Becky [Ninkovic]’s basement?

YSP: The biggest change has been the lineup changes. Having Krista [Loewen] leave the band this past summer has also been hard. She was there in Becky’s basement at the first practice. The desire to have fun and play music and entertain is still the same. The Smoking Spokes (our original bike gang) disbanded years ago and we’ve grown and adjusted through the lineup changes. Yet we’ve never picked anyone to be in our band that hasn’t had a strong connection to Abbotsford in some way. So to have Al Boyle and Robert Andow in the band now, they understand the original spirit that the band has, they’ve known us even longer than the band itself.

D: “Lonely’s Lunch” is quite the epic music video, where did the idea for it come from? Also, why was it shot on location in India?

YSP: After making so many music videos with the band itself performing in the video, we decided that we needed to do something differently. We approached Sean Wainsteim, who directed our “Monster” video in Prague back in 2007, with the idea to try something new. He was intrigued by the opportunity and the challenge and presented us a treatment for the video. Abbotsford has a strong Sikh community that is well integrated into the community at large, and so the suggestion of India didn’t seem that foreign to us at all. We’re very happy with the results and the response that the video has been receiving.

D: Remixxxx is out, and it’s delicious. I enjoyed the Teen Daze and Los Campesinos remixes. How did you get in touch with the artists who did the remixes? Was it a joint effort? Or did the label handle it?

YSP: I’m friends with both Teen Daze and Tom [Campesinos] from Los Campesinos. It was just a matter of writing them emails asking them if they were interested. It was great to get such awesome remixes from them. (A lot of the other remixers we knew.) The label suggested two other remixes for the album but ultimately we had total control of what songs made it and what songs didn’t. For remix records, I feel the band takes on the role of curator as opposed to being the artist. Usually the music media and fans criticize remix records, but I’ve always taken on the attitude that this is our chance to expose our fans to great artists they may not know.

D: During 2008 you all took some time off from the band. Was this a joint decision?

YSP: This was a decision of necessity. [In] 2007 we toured ourselves into the ground. Not many people realize that You Say Party! We Say Die! toured for 16 straight weeks without coming home. At the end of week 14 we had a huge band fight in Berlin and it seemed [like] the end of the band. We managed (with the help of our tour manager Liv Lunde) to resolve the conflict between the two camps in the band and help us get back to a place where we were able to finish the remain two weeks of the tour. What people don’t know is what’s even further behind that. Becky’s health was the worst it’s ever been. Having lost nearly 30 pounds and touring on despite being sick and without a voice during the day, we pushed through sheer exhaustion. The rest of the band was crumbling and we weren’t sure why were even a band at all. Getting home at the end of 2007 and re-evaluting our lives, both personally and together as a band, we realized that we had done ourselves a great disservice. We had to turn down another opportunity to return to Europe in January/February 2008, opening in arenas, and instead focus on healing and recovering. It was months before Becky and I could even return to work. But in March 2008, we took the opportunity to tour China and that was another major turning point.

D: These past six months have been a time of transition for your band and us at Discorder are truly sorry for your loss of drummer Devon Clifford. Why did you decide to continue on as a band, and how has Devon’s death altered your outlook?

YSP: Losing Devon has been a huge loss for this band. Many people in Vancouver knew Devon and what an amazing personality he was. He touched so many lives. He was a protector in this band and he watched over all of us. It was Derek [Adam], three weeks after Devon’s passing who said we needed to carry on, to work harder than ever and carry Devon’s spirit on. Becky and I were moved and felt we had to do the same as well. Every night at our shows on this European tour Becky has lit a flame and dedicated it to Devon. It’s been incredibly emotional and incredibly healing. The response from the crowds has been nothing but positive and been instrumental in the process of grieving the loss of such an amazing drummer, friend and band mate.

D: Your current roster has Al Boyle of Hard Feelings on drums and Robert Andow from Gang Violence on keys, how has Boyle’s and Andow’s musical style contributed to your sound?

YSP: Al and Robert have got to be two of the very best musicians in Vancouver and we count ourselves very lucky to have them apart of our band. We’ve played shows opening for their previous bands (WPP, Cadeaux) and have known them both a very very long time. Devon was very close with both of them and it seemed only logical to have them join our band and help us carry on Devon’s spirit.

D: Although touring is nothing new to you, does homesickness still affect you?

YSP: Not me, my grandmother told me shortly after high school that I was plagued with Wanderlust, and it’s true. Prior to founding YSP!WSD! I was hitchhiking Canada. Seeing Edmondon band the Wolfnote in Charlottetown, P.E.I., I realized that travelling was great, but playing a show every night and travelling was even better. So I came back to Abbotsford and started this band.

D: What is next for You Say Party?

YSP: We’ve demo’d six brand new songs this fall and we’ve got plans to write more over winter. We’re planning a Canadian tour in the spring with Paperbag label mates Young Galaxy. Also, since I recently received my proper paperwork to return to the USA, for the first time in four years, You Say Party will be returning to touring regularly in the US! Very exciting! After that we plan to get back into the studio and record another record.