The crowd arrived early at Rickshaw Theatre, and the anticipation was tangible by the time openers Plus Perfect took the stage. Filling in after a last minute cancellation by Be Your Own Pet’s Jemina Pearl, the Vancouver four-piece had big shoes to fill, but they powered through their set with crowd-pleasing indie rock. Vocal harmonies by guitarist Andrew Candela and bassist Jesse Gander made each chorus stand out, and they were backed up by an energetic performance by Lane Small on drums. Mike Gittens played along on keyboard, adding another layer of depth to their sound.

Next up were Islands, one of the biggest acts to emerge from the Montreal indie music scene. Frontman Nick “Diamonds” Thorburn stole the show as soon as he walked onstage, wearing a rhinestone-studded cape with “DIAMONDS” written across the back. He lost the cape a few songs later, but never lost the crowd’s attention. Thorburn was joined onstage by Jamie Thompson, as well as newest members Evan and Geordie Gordon. Thompson, a collaborator of Thorburn’s since the Unicorns, recently returned to play with Islands after a three-year hiatus.

Islands opened their set with “Switched On,” the first track from their September release Vapours. They showcased their new electronic-inspired sound by playing most of their latest album, with Thorburn reaching out to touch hands with fans during the title track. The energy in the room rose substantially for older fan favourites such as “Where There’s a Will, There’s a Whalebone,” “Don’t Call Me Whitney, Bobby” and “Creeper.” Islands took a short break after their set before returning to the stage to play “Rough Gem” and the nine-minute epic “Swans.” They may have changed their lineup and style, but on this night they showed why their motto is “Islands are forever.” 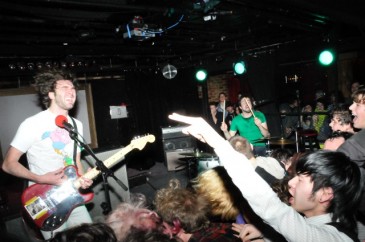