You know, I’m not one for using tired literary devices when describing new music. However, there was a bit of irony in the fact that Gang Gang Dance and Marnie Stern, two of the brightest, most creatively gifted acts coming out of New York today, played the Biltmore Cabaret, one of Vancouver’s pre-eminently dim-lit, cave-like basement venues.

Even though it was a rainy Tuesday night, I had thought that acts of this calibre might draw a bigger Vancouver crowd, but there was plenty of room to manoeuvre around the belly of the beast. Maybe an increasingly engaging local scene and the mainstreaming of sub-cultural tastes among some circles of music fans have removed the allure around performances from even the most innovative of the Pitchfork-approved set.

Stern took the stage first, firing off song after song of blazing, ingeniously sloppy compositions of guitar rock glory. Sporting a fashionable T-shirt emblazoned with the words “Uptown Bitch,” she appeared genuinely happy to be playing and certainly made good on her reputation for unhinged virtuosity. The whirls and wiles of Stern’s velocity freak anthem “Transformer” was the undeniable highlight of her set.

While Stern had looks that kill and riffs that shatter windows, Gang Gang Dance’s performance brought the proverbial noise for the evening. The quartet crafted a lavish set filled with highlights from their previous records and their new, pop-inspired album Saint Dymphna, but it was how they started it off that really counted. The band lulled the crowd into their netherworld with a hypnotic, half-hour long rhythm jam that nearly shook the foundation of the Biltmore. Synthesizers buzzed and guitar noise cracked while vocalist Lizzie Bougatsos drummed manically and sang notes that certainly do not exist in the scales of Western musical notation. Some took the opportunity to dance, but most in attendance were rightfully entranced by dissonant drones and syncopated rhythms, elements of music that rarely break the surface of pop, especially in such a visceral and powerful manner. 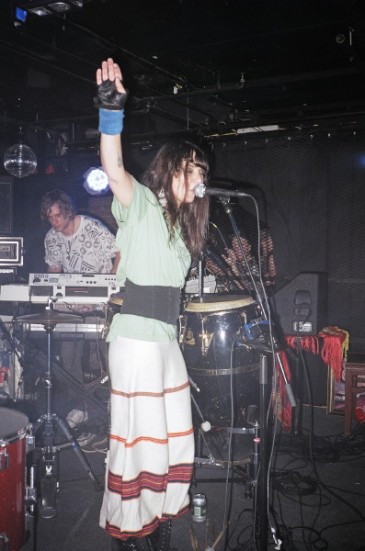