Floors rumbled at the Lotus Child Gossip Diet CD release party. The show kicked off the Vancouver piano-based indie band’s West Coast tour with one hot hullabaloo. I mean sauna hot. Dan Mangan opened, setting an intimate mood with the crowd seated cross-legged on the floor, everyone agog at the levels of his guttural sound. Next up, Mother had the house abuzz with their folkie-funky crisp-clean quality. If the crowd wasn’t dancing by that point, Lotus Child got them jumpin’ (literally).

During songs such as “Archaeologists,” a few surprise voices joined in, as members from Hey Ocean! and The Painted Birds jumped on stage. The surprises continued into “Gossip Diet” with vocal group Aliqua joining the euphony, reproducing the CD sound as much as possible. Guitarist and lead singer Zachary Gray struck up a roundelay of “We’re not perfect!” booming through the crowd.

Difficult to peg down style-wise, Gossip Diet ranges from funky numbers like “Archaeologists” to foot-stomping rockout “Lids” to calm but elating “Coelacanth,” withal remaining musically exoteric, and yet distinguishing its dancy demiurgic self in the indie rock genre.

The night was somewhat of a family affair, as Mother’s self-titled CD is also Howard Redekopp produced. Castle Project topped off the night with a din of songs sounding more or less the same. Nonetheless, the sauna cooled at 1am and we were all dog-tired and ready for a shower. You can catch Lotus Child playing their homecoming show August 6th at the Backstage Lounge. 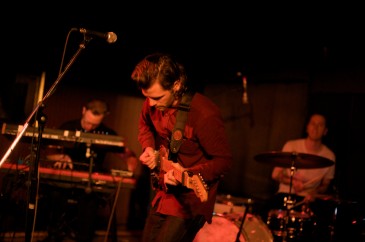