It’s not often that the Astoria is packed at 8 p.m. on a Tuesday night. The sizeable crowd — who could have indicated of an out-of-town couch-surfing convention — took over the bar before bands started setting up; the din of European languages bouncing around the room added an interesting buzz of mystery to the groups showing up just in time to see openers Nam Shub.

Recently, Nam Shub have been doing a bit of an instrumental switch-up. While the band is still drums, guitar, bass, and synths mashed together in a psychedelic alternate-reality version of the Beatles‘ hallucinogenic era, the way those instruments interact has been changing over the course of their last few shows. For their Astoria show, bassist Caton Diab was responsible for handling melody and bass leads, playing his four-string like a big guitar and leaving the synths plenty of room for heavy low note beats. While this arrangement might leave guitarist Bill Young with a little too much room to twirl his fingers between atmospherics and tremolo-picked riffs, it proves Nam Shub are a continually evolving post-rock amalgam.

There’s no such thing as “your typical singer-songwriter” these days. It’s hard to explain without first-hand observation just what sets Ora Cogan apart from the rest, but the term “ethereal” comes to mind. Cogan’s stage presence is phenomenal: part phantom, part folk, the audience was pinned in place from the second she got on stage to five minutes after her last song ended. Along with a long-lost Londoner friend playing bowed guitar, Cogan’s reverbed crooning and bright, simple chord progressions were lush and articulate, despite some annoying feedback issues in the first half of her set. Complete with between-song storytelling, her set fell between the sounds we’ve all heard before and a fresh look at how to combine them: déja vu in musical form.

Evy Jane know how to do things the hard way. Experimental R&B could have been as simple as a laptop, synthesizer, and singer, but the duo of Evelyn Mason and Jeremiah Klein instead surrounded themselves with pedals, drum machines, and keyboards in a setup not unlike your favourite noise or drone band. The two are culled from the same list of British influences that the XX might have chosen from: a little bit Chromatics, a little bit 1930s bar jazz, Evy Jane were smooth to the point of dripping, even if continued feedback issues took the crowd out of the moment every now and again. Beats as heavy as the ones Klein was producing were designed for carefree dancing, so it was nice to see the combination of couch-surfers and pop enthusiasts moving to the Astoria’s improved sound system. 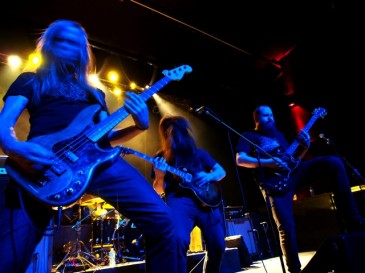