Vanished
Opener Suuns did a good job setting the scene for the rest of the night, with punishing kick drum-heavy beats and moody yet danceable melodies flooding the Commodore’s sound system. It was hard to tell if the group’s lyrics had any importance, though, with singer/guitarist Ben Shemie injecting the ‘shh’ sound between every word, making his vocals come off like one long, slurred syllable. In any case, they were a lot of fun.

Now, you don’t have to know much about Crystal Castles to be aware of their reputation for loud, violent onstage insanity. As they took to the stage, the Ontario synthwavers bragged that singer Alice Glass had broken her ankle at a previous tour stop, but was too hardcore to cancel the tour. Opener “Fainting Spells” was performed in darkness, save a strobe light at the back of the stage–but oh, what sight. The effect the pulsing light had on me was like going blind, or like staring at the sun. I had no idea what was going on, and it was awesome. “Baptism” followed, and kept to the dark mood set up by “Fainting Spells”, both sonically and in terms of lighting.

Things changed, though, as the stage was bathed in shimmering red lights, and the group swooshed into the 8-bit club number “Courtship Dating.” Astonishingly, up to that point, it was the best song yet. How had “Baptism”, one of the best tracks on the group’s 2010 self-titled album, been so easily bested by a song I previously thought was just OK?

The trend continued. “Doe Deer”, easily the band’s angriest song, didn’t effect the crowd’s easygoing mood (and didn’t seem to try). “Crimewave”, the HEALTH cover/remix I’ve always felt pumped up the profile of the wrong band, had me dancing, despite myself. Even the annoying non-song “Air War” had its charm in a live setting. By this point, regardless of my expectations of anger and tension from the band, I was fully invested in dancing along. Until, that is, “Celestica”, where I had to slow down and pay attention to make sure my ears weren’t deceiving me and that Glass really was singing that well. Between it and “Suffocation,” it’s clear she has the pipes to reproduce more than just her trademark shrieks and yelps.

The night ended with “Intimate” (or maybe “Yes No”, I’m not sure of the order). Either way, it was a fittingly energetic finish. In the end, it seems, all my initial hesitations about the show ended up unfounded. Everyone there, including the band, had just come to party. Between the band’s music and the impressive light show, you couldn’t help but dance. 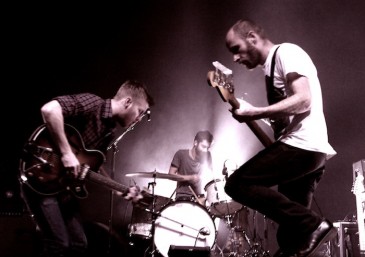