Returning to Vancouver to support the release of their latest album Magic Chairs, the Danish group Efterklang were simply brilliant.

Opening the show, Aunts & Uncles played and sounded a lot better than the last time this reviewer saw them. While much of their material was the same, their sound was tighter and they were more confident on stage. Hell, they even seemed to enjoy themselves up there. Certain Breeds followed and they blew the roof off. Lead vocalist Jen Riego was mesmerizing. Their gothic pop felt like tentacles of black smoke swirling around, slowly constricting your heart.

Next was Efterklang. Where to begin? Bringing their vast, sweeping, epic soundscapes to the slightly cramped Biltmore seems like a contradiction in terms. That said, it was a treat to see them so close. The Danish use the word “hygge” to describe everything warm, close and cozy, and this show fit that description. Predominantly performing tracks from Magic Chairs, the band was simply perfect. Lead vocalist Casper Clausen used the roof as his drum set, engaging the audience in cheerful banter between songs. Bassist Rasmus Stolberg didn’t wipe the grin from his face all night, and touring backing vocalist, Heather Woods Broderick, added an extra dimension to the sound.

The only awkward moment came towards the end. Just as they were launching into “Cutting Ice to Snow,” the crowd chatter got a little loud. Efterklang waited patiently for it to die down, which it eventually did, and they got on with the song. Manning the merch table after the show, Efterklang proved themselves to be as likable off stage as they are on. Vancouverites, you’re lucky bastards to have witnessed such a magnificent show. 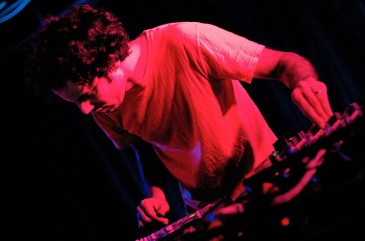