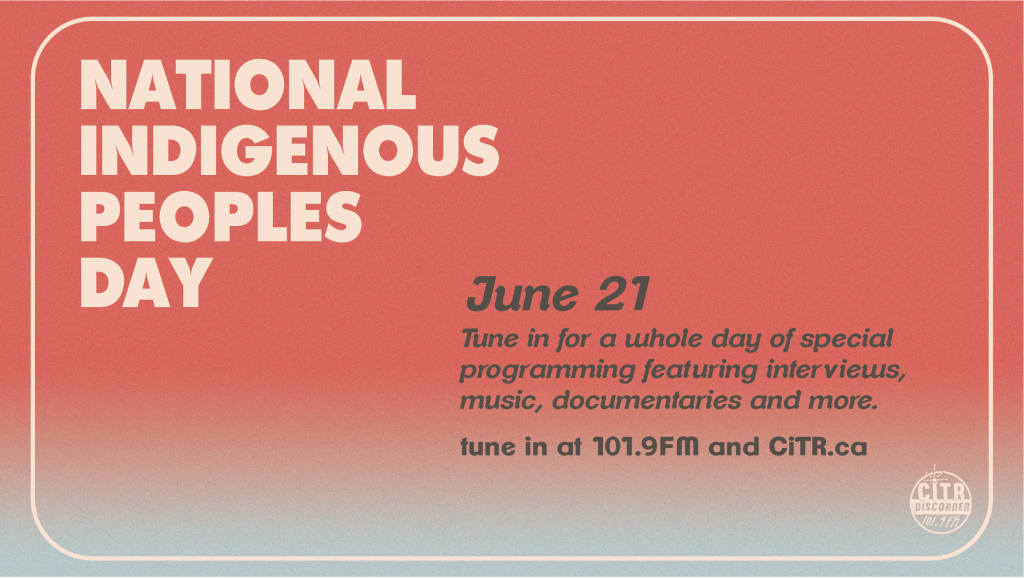 We acknowledge that this event takes place on occupied, traditional, ancestral, and unceded territories of the Coast Salish peoples – specifically the sḵwx̱wú7mesh (Squamish), sel̓íl̓witulh (Tsleil-Waututh), and xʷməθkʷəy̓əm (Musqueam) nations.

2:30PM: Carving Space: Navigating Indigenous Identity at UBC –  Members of the Indigenous Leadership Collective at UBC draw on their unique backgrounds and share their experiences with coming to UBC from places as far away as the Northwest Territories. Produced by Myia Antone and Sage Broomfield.

3:30PM:  Interview with Cheryl Robinson who is the Acting Executive Director of the Urban Native Youth Association (UNYA). Produced by Myles Black.

4:00PM: Indigenous music playlist with Shoes on a Wire. Produced by Madeline Taylor.

6:00PM: Interview with Lori Snyder, a local Métis herbalist. Lori is from BC and found herbalism and education about indigenous plants has helped her reconnect to her Métis heritage. produced by Emma Ng.

8:00PM: An interview with Tasha Faye Evans the project leader of The Port Moody Ecological Society’s hosting of a Traditional Coast Salish Blessing Ceremony. She gives background of the project, the challenges and transformations in the community and with the municipal political leadership. Produced by J. Peachy

9:15PM: As the BC government has approached its decision about passing or declining the renewal of 20 open net fish farms in unceded and traditional First Nations waters, Indigenous communities have voiced their dissent clearly. This documentary follows the events and discourses of a rally to end fish farm tenures, featuring the voices of Eddie Gardner, Dawn Morrison, and the present First Nations community. Produced by Sophia Sauvageau.

9:45PM: An interview with Harlan Pruden, a prominent Cree two-spirit activist based out of Vancouver about the role of two-spirit individuals within both indigenous communities and the queer community. Produced by Ande Laidman.