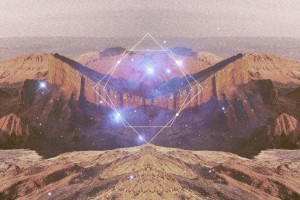 Jeff Mills opened the New Forms Festival Thursday, Sept 12 – the description at New Forms is relevant to our discussion, please check it out. Arts Reporters Emma Gregory, James Bates and Brad Winter were excited for Jeff Mills, legend that he is. However, while they enjoyed their first taste, on extended reflection, The Star People did not imbue the event with the cosmic relevance that Mills intended.

Most importantly, we all look to New Forms – and with damn good reason – to reflect what’s happening now. New. Forms. We are confident that this is a rare miss for the fest, at least compared to what the intentions were. We still danced and marvelled, but from an arts standpoint the event was disappointing on several levels.

Check out our other work on New Forms: Soda_Jerk Q&A, Dynamo Lines Q&A.

Here are the Arts Report’s observations:

Jeff Mills’ DJ set Thursday night was an epic, classic Detroit Techno indulgence in repetition. However, it was not the impressive, imaginative soundscape and visual journey it was billed as. Particularly lacking were the uninspired visuals, which smacked of laziness. If you are going to just download and project the first five images after Googling “space,” or “stars,” you can’t really get away with calling this anything other than a (rather impressive) DJ set. Furthermore, I was excited to see how the connections between certain aboriginal cultures and alien mythology would play out. This was perhaps the biggest disappointment. Maybe I should have been tipped off by the heavy use of the word “Indian” denoting North American indigenous people in NFF 13’s own description. But simply superimposing images of first peoples onto the aforementioned space images does not serve as any substantial comment or exploration of the Afro-futurist ideas Star People seemed to draw inspiration from. Mills’ turntable wizardry is legendary. But perhaps he has became a victim of his own hype. If I had arrived Thursday night prepared to dance, without any expectation of narrative or mythology, I probably would have enjoyed the night a lot more. And I don’t think I am alone on this. [Ed’s note: The reporters agree, the head space of a visual arts media project is differnt than a dance session.] Not to worry. Lee Gamble, Dopplereffekt, The Passenger, and other world-class artists take the stage tonight. – James Bates

[Ed’s note: for some amazing Afro-futurist works, check out Astro Black , and The Fourth Way at New Forms. And read a Q&A with the Arts Report and Soda_Jerk (Astro Black). ]

“A 3 hour musical observation and journey on the relationship between humans and our paternal connection with visitors from the stars.” Leaving “Star People” after only an hour I wondered: who wrote the online write up for Jeff Mill’s opening performance at Vancouver’s 2013 New Forms Festival. There was no observation on the relationship with humans an our space mothers in my opinion. The visual component of Star People was literally that: pictures of stars and pictures of people. Sometimes the pictures were imposed on one another. Mill’s played on several cddjs and I heard later he played a few 909s, though I didn’t hear them.

I had the opportunity to hear him play at the Detroit Electronic Music Festival last summer and it was hella vibey. He played “The Bells,” on what appeared to be nine turntables. Fantastically trippy, the audience went bananas. If anything Jeff Mills has done reflects humanity’s relationship with aliens that did. Far away deep space aliens felt those vibes and listened.

I doubt Star People resonates with aliens. The write up talks about Indians believing in aliens. “Indians” of the Americas is a diverse category, not all nations or tribes believed in aliens. – Emma Gregory

Jeff Mills exhibited his mixing prowess on an array of CDJs by blending intricate techno rhythms in his characteristically precise and subtle style – manually adjusting tempos to keep multiple streams of rhythm in time. There were a couple of exciting change-ups but as a whole it was not very evolved, technologically or artistically. The whole aliens story could have been fleshed out a bit more visually or aurally.

Near the end of this interview, Jeff Mills says that he doesn’t play other producers or care about what they are saying because he just wants to develop his own voice. Whichs is great, except that he’s still a DJ and if he’s not going to seek out interesting underground tunes made by the artists who are at the forefront, then he’s a DJ who plays his own tunes. And even that is fine because he mixes very well; but if he wants to continue to innovate he has to learn new technologies that will enable him to perform live in a more interesting way than just playing a drum machine over records. He is still developing the means to tell his story. – Brad Winter
New Forms continues through Sunday, Sept 15. 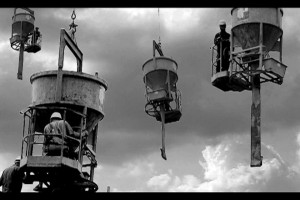