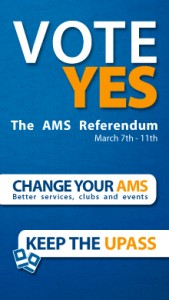 From March 7 to 11, UBC students will have the chance to cast their votes in the upcoming AMS Referendum. The Alma Mater Society of UBC Vancouver lobbies on behalf of students to the University administration, as well as government, on issues such as financial assistance, tuition, housing and transit.

The AMS Referendum will ask students to change the AMS fee structure and bylaws to improve services, clubs, events and accountability. The general AMS fee has not changed since 1982 and voting yes will mean more than $800,000 in new funding for only $5 more per year.

Here’s a quick rundown of the issues being addressed by this Referendum:

1. Changes to the AMS fee structure: Fees for various clubs and services will see a small increase, but will go towards improving necessary services such as Student Child Care, sustainability and subsidies for low income students. Fees will also be indexed to the British Columbia Consumer Price Index, so that student fees will gradually increase along with inflation.

2. The survival of the U-Pass: Voting YES will see an increase in the monthly U-Pass fee from $23.75 to $30.00, but as the AMS fees have not increased since 1982, the new U-Pass fee is simply what the current fee would be after inflation is taken into account. If the Referendum fails, the U-Pass program will cease to exist entirely.

3. Bylaw Changes: The AMS is proposing a series of Bylaw changes that would not only update language used in the Bylaws, but would also see changes to how the AMS conducts business. Some of these changes include lowering quorum for general meetings and changing the dates of Executive election and turnover.

For a complete look at the Referendum Questions up for student consideration, go to the AMS VOTE YES website and be sure to vote between March 7 to 11!

Change Your AMS. Keep the UPass.