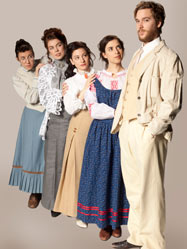 Wild Honey is a 1984 adaptation by British playwright Michael Frayn of an earlier play by Anton Chekhov. The original work, a sprawling five-hour drama from Chekhov’s earliest years as a writer, has no title but it is usually known in English as Platonov, from its principal character “Mikhail Platonov,” a disillusioned provincial schoolmaster.

Platonov has a way with women, and it’s both his blessing and his curse, in Michael Frayn’s re-visioning of Anton Chekhov’s unfinished play. Wild Honey swings between the polar opposites of melodrama and farce, and shakes them into an intoxicating cocktail.