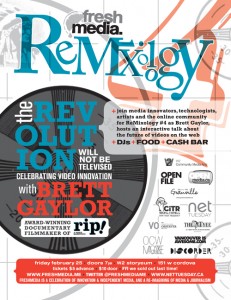 Join Brett Gaylor and Vancouver’s finest remixologists for an interactive talk about the future of the video on the web. Award-winning documentary maker Brett Gaylor will give us an overview of the innovative approaches to interactive online video from around the world. Brett will also talk about his own work experimenting and developing open video tools, and discuss ways media makers and citizens might utilize open video tools and techniques. He will also lay out where he thinks the future of web video is going and the current threats and opportunities to open video. Video is an increasingly important aspect of the web — YouTube alone serves around 1 billion videos per day. What better time to talk with one of the world’s leading video innovators?

SPEAKER//
Brett Gaylor is the project lead for Mozilla’s Web Made Movies project, an open video laboratory researching the intersection of video and the web. Before working with Mozilla, Brett directed the award wining documentary RiP!: A Remix Manifesto (https://ripremix.com/), created OpenSourceCinema.org, helped found homelessnation.org, and was a key creative at the Montreal-based production house EyeSteelFilm.

TICKETS //
$5 tickets in advance (https://remixology4.eventbrite.com/) and $10 at the door
FYI – this series always sells out!