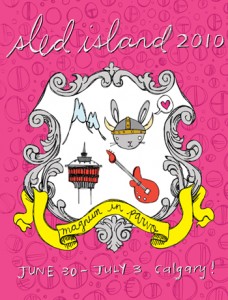 Sled Island has announced their initial musical lineup for the Sled Island Music & Arts Festival at multiple venues throughout Calgary, Alberta. The full festival lineup will be announced May 1st and will include more than 200 bands performing at 25+ venues, an independent film festival from June 24 – 29, comedy shows, and art exhibits!

Local favorites on the line-up include: Babe Rainbow, No Means No, The Pack A.D., SSRIs, Carpenter, Party at the Moontower, In Medias Res, Bison B.C., and You Say Party! We Say Die!

General admission festival passes are now on sale for $170 (plus service fees) at www.sledisland.com A limited amount of all-access VIP passes are available for $350 (plus fees) and main stage individual day passes + individual show tickets will be made available following the full festival lineup announcement on May 1st.

For more festival info go to www.sledisland.com and check out the Facebook page!