And finally they were here. After years of troubles at the border, on Sept. 27, Dead Prez performed their first Vancouver show to a sold out crowd at Fortune Sound Club.

In keeping with their support for indigenous sovereignty in the U.S., Stic.man and M-1 opened their show by acknowledging the unceded Coast Salish territories on which Vancouver lies. Then they moved right into the classic “Radio Freq.” With the crowd roaring back the hook—“Turn off the radio! Turn off that bullshit!”—the duo had established their introduction to the “Revolutionary But Gangsta” ethos for which they are most famous. They then proceeded to go through all their hits, from the infamous “Hell Yeah” to the ballad-like “Mind Sex.” They also threw in a few covers into the mix, including a slick sampling of Drake’s summer hit “Far From Over.”

Both clad in flamboyant red and black outfits, the pair wore their politics not only in their music, but literally on their sleeves. Their DJ’s laptop was emblazoned with a Te Mana Motuhake o Tuhoe sticker that read “Liberators Not Terrorists.” And lest M-1’s kafiyyeh be read as some humdrum hipsterism, the two spoke between sets about the need for Palestinian liberation (last year, right after and prompted by Israel’s first raids on aid flotillas, M-1 did a performance in Gaza). Even when talking about peace and love, they predicated its pursuit on the struggle for equitable justice. When some fans threw “Resist Gentrification” t-shirts on stage near the end of the show—a comment on the especially negative reputation that Fortune Sound Club’s bouncers have garnered in the Downtown East Side—they picked them up and read them on stage. The t-shirts’ backs were emblazoned with lyrics from their song “War Zone:” “bouncers acting like cops in their club.” To the hearty approval of at least some of the crowd, they closed that set by calling on fans to remain cognisant of the disproportionate impact that gentrification has on the poor and marginalised. After the show, they spoke to fans individually about their politics, proving that for them their music really is bigger than hip-hop.

If their audience that night was anything to go by, after 14 prolific years as fixtures of underground and conscious hip-hop, Dead Prez has acquired a large and diverse fan base, most of them clearly devotees of the RBG mantra, with varying understandings of its underlying implications. About midway through the show a young white man in a faux Native headdress climbed on stage, to the disapproval of some audience members who appeared disgruntled as much by his appropriation of sacred indigenous traditions as by his interruption of the show. He was quickly removed.

The show ended with the duo announcing the release of Dead Prez’s new mixtape, “Turn off the Radio Volume 4: Revolutionary but Gangsta Grillz”, available for free download at www.deadprez.com. Musically, the new songs are moving in a more mainstream direction, no doubt ensuring more fist-pumping dance floor hits, but lyrically, the contents lack none of the critical force that keeps fans coming back. 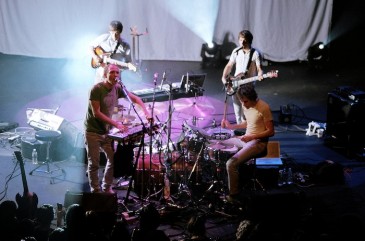