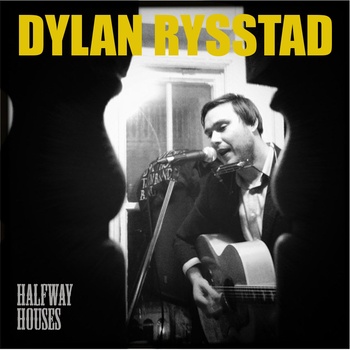 Dylan Rysstad, who was formerly known as Dylan Danger from 2004 to 2010 during his time in Vancouver punk band the Jolts, and until recently, as Dylan Thomas (his first and middle names), has now released solo album number five: Halfway Houses. From his years spent living and performing in Prince Rupert, Vancouver, and Ontario, Rysstad has accumulated some skilled musician friends and contacts that perform on and help record his albums. Halfway Houses was recorded and mixed during two sessions — in Welland, Ontario, at Tapes and Plates, and in Vancouver at Little Red Sounds studios.

Much of the album has a distinct country and folk-rock feel to it. The pedal steel, organ, harmonica, mandolin, and banjo all make appearances and Rysstad’s signature acoustic guitar work lays a solid foundation. Opener “The Great Wall” fits right in with recordings by Blue Rodeo or Tom Petty and influences like Bob Dylan and Neil Young are evident on slower songs like “The Last Time You Looked,” “Born Dyin’,” and “Screaming Bloody Murder” with its stripped-down six-string and harmonica.

“Lennon Etc.” has introspective lyrics and guitar/piano parts that sound in debt to classics like “Let It Be,” “Hey Jude,” or “Karma Police.”

Things get downright cheery and jangly with “Tender Love (Turns Tough)” and Rysstad’s rock/punk past life is hinted at with his own Stooges-like electric guitar solo and harmonica played by someone simply named Burger on “If Only for Tonight.” “When in Rome” has fuzzed bass and “whoah-oh-oh’s,” and hand-claps might be the only missing thing. Although there are often some obviously sad minor-chord arrangements and country’s usual lyrical suspects—broken hearts, broken-down vehicles, alcohol, rejection, self-pity, and general bad luck, most of the songs still have an infectious youthful charm that doesn’t leave a listener feeling depressed. Rysstad acknowledges personal woes such as being lonely, stubborn, broke, hard to love, and aimless while trying to fit in somewhere, but he also gives the impression that he has the ability to escape (or change) if and when things get worse.

Halfway Houses embraces those times in life when there are feelings of uncertainty and doubt and with a little help from his friends, Rysstad has successfully captured this in the form of yet another good solo album.